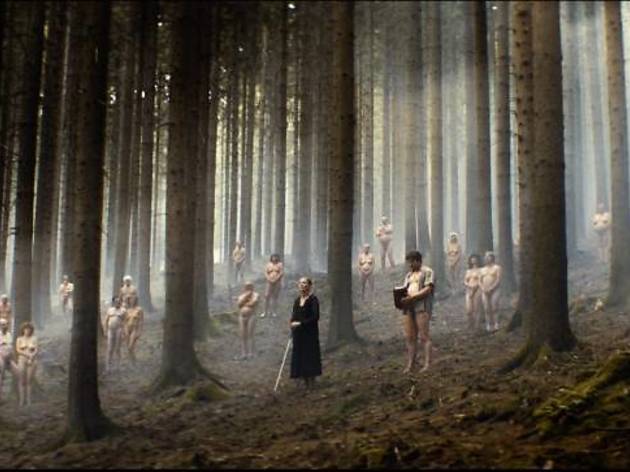 If a young Lars von Trier remade Carry on Camping, it might look a little bit like this unusual, slow-burning and surprisingly touching comedy-drama. It’s set in a nudist campsite deep in the woods somewhere in Belgium and follows Patrick (Kevin Janssens), a paunchy, shy 38-year-old man mourning his dad. The old man’s death, paired with his mum’s blindness, has left him managing the holiday retreat, and its company of scheming guests, on his own. Faced with this nightmarish turn of events, he retreats into a carapace of mute glumness that’s undercut only slightly by the fact that he’s stark bollock naked from the waist down.

One of director Tim Mielants’s most impressive feats in a film full of low-hanging flesh is keeping your focus on the unfolding drama – the plot driver is Patrick’s dogged quest to find a missing hammer – and the sniggering to a minimum. The setting adds an intriguing paradox, too: logically, no one should be able to hide anything, yet everyone seems to be doing exactly that. For one grasping couple, it’s weaselling control of the campsite from an unsuspecting Patrick; while for lawyer Nathalie (Hannah Hoekstra), the closest thing Patrick has to a confidante, it’s a latent desire to escape her self-regarding rock-star boyfriend (Jemaine Clement, having a blast behind the sunnies).

For most of the characters here, nudity is obviously a source of comfort. For Patrick, played with an air of childlike naivete by Janssens, it’s yet another source of vulnerability. Janssens’s performance centres this leftfield exploration of grief and personal growth with the subtlest of shades: pain, pride, loneliness and a hint of pent-up anger. Mielants’s horror-movie-esque pans also add to the sense that Patrick is a bit of an unexploded bomb.

Typically, for this nicely judged blend of deadpan comedy and aching sincerity, the hinted-at violence finally arrives in a hilarious melee that leaves a holiday chalet ransacked and your mind indelibly imprinted with the sight of dangling testicles and flabby bellies doing battle in a giant melange of pale, middle-aged flesh. It’s the funniest nude scene since Toni Erdmann (a film Patrick shares some DNA with) and as hilariously awkward as that excruciating man-grapple in the first Borat. It all ends up with the entire chalet wildly askew – a lot like the film.

Available to stream in the UK now.