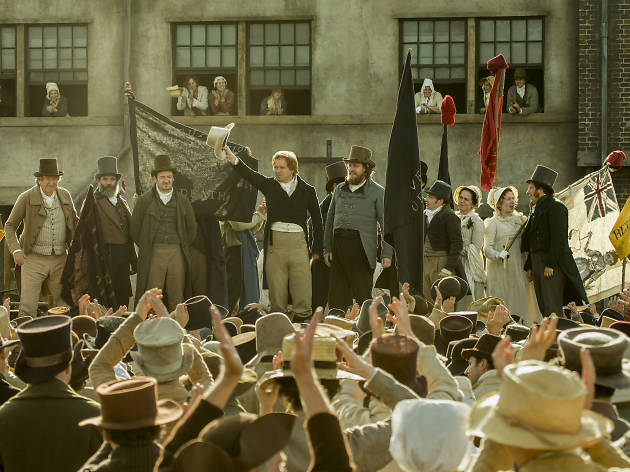 Mike Leigh provides blood, thunder and a whole lot of talking in this timely historical epic.

Long, densely scripted and full of thunderous passions, Mike Leigh’s urgent grassroots epic about an infamous 1819 massacre of peaceful protestors by cavalry is a whole lot of movie. It’s meticulously crafted, every scene drawing you in with precise period detail and full-bore performances from its ensemble cast, and it powers through great slabs of British social history, finding contemporary relevance every step of the way. The iniquity of the Corn Laws, the struggle for the vote and the birth of England’s Reformist movement are all covered off en route to the violent climax we know is coming. The authenticity is immersive, even if the historical exposition occasionally feels like prep for an exam no one’s warned you about.

It opens with shell-shocked young bugler Joseph (newcomer David Moorst), on the shattered battlefield of Waterloo in 1815, before swiftly introducing a country where the spoils of war are shared equally between the rich and the very rich. As the Tory Prime Minister hands £250,000 to the victor of Waterloo, the Duke of Wellington, the traumatised ex-soldier returns home to Manchester to find his mum (Maxine Peake, terrific) barely able to afford bread. The tariff-fixing Corn Laws are keeping prices inflated, stiffing the city’s textile workers as farmers and landlords continue to ratchet up the profits.

You don’t need to be a member of Momentum to feel the modern-day resonances. Laudably, Leigh ignores the ‘great man’ theory of history to detail how change is brought about by men and women blessed with little more than conviction, smarts and articulacy. Time is taken, too, to show ideological differences playing out within the growing protests. As one young firebrand (Nico Mirallegro) is flung in jail, other calmer figures make the case for more modest, peaceful demands. Rory Kinnear’s moderate reformer, Henry ‘Orator’ Hunt, emerges as the movement’s figurehead, not least because he’s a man of means and so protected from repression. He’s also a pompous twit and Leigh has fun with him struggling to connect with the people he’s supposed to be representing.

Each of the story’s many elements – from politicians and protestors to informants and journalists – is given its due, but the characters suffer a little in a movie with a hundred places to be. Least satisfying are the powerful cadre of magistrates, politicians and royals who line up against the protestors. Odious types ranting about ‘the dangerous threat of rampant insurrection’, they’re cartoon villains where a little more nuance would have deepened the drama. Tim McInnerny hams it up like one of Cinderella’s Ugly Sisters as a bilious Prince Regent more concerned for his gullet than his subjects.

Happily, Leigh saves something special for the final reel. After two hours of claustrophobic salons and candlelit chambers (shot by long-time Leigh cinematographer Dick Pope with a muted palette, as if the world has lost its vibrancy), ‘Peterloo’ finally bursts into the light with the biggest set-piece of his career. Mostly bloodless but still gut-churningly visceral, the scene in St Peter’s Field is terrifying and traumatic, yet in its aftermath oddly hopeful. From the panicked faces of the watching magistrates, it’s clear that the violence they’ve unleashed will only speed the change the protestors crave. It’s an optimistic note at the end of a serious-minded, sombre movie.