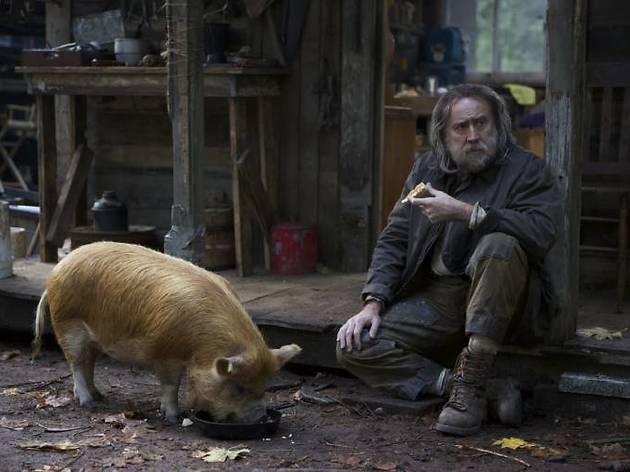 There’s an irony of sorts that it’s taken a pig to get Nicolas Cage to ditch the ham. For a while now, the actor has been a magnet for every Hollywood script involving a bug-eyed middle-aged man who speaks in upper case and has major impulse-control issues. They’ve often been fun to watch – some, like Richard Stanley’s mesmerising gonzo-athon Color Out of Space, even better than that – but they’ve never got close to tapping the actor’s full range.

This elegaic, enveloping kinda-revenge thriller from Michael Sarnoski is the perfect reminder of just what he can do. The first-time director, who also co-wrote a screenplay that jackknifes in all kinds of surprising ways with Vanessa Block, has provide him with a less-is-much-more showcase of his craft. There are one or two dialogue scenes – one haunting exchange in a restaurant, in particular – that are right up there with the best of the year.

Cage plays Rob Feld, a once-respected chef who’s been living off the grid for 15 years in the forests of the Pacific Northwest with his beloved truffle pig. He scratches a living selling the rich earthy gobbets to slick twentysomething Amir (Hereditary’s Alex Wolff, clad like a young Sonny Crockett), his own concession to his past life is an array of knives and kitchen tools with which he whips up gastronomical delights.

Feld is a quiet man, a loner so unaccostumed to speaking, he has to clear his throat just to get the words out. But there’s a storm whipping up inside and the theft of his beloved pig has it gusting at full force. Quickly, Amir is roped into Feld's angry quest to recover her, one that takes in mum-and-pop truffle dealers, local junkies and the shadowy underworld of Portland.

And the surprises don’t end with the discovery that Portland even has a shadowy underworld. Just when you’re settling in for a kind of John Wick-style oinksploitation thriller, Pig trots off down a road all of its own. It’s a film that preaches patience and understanding that’s so wonderfully, wildly out-of-kilter with traditional Hollywood logic (‘They took his pig – now they must pay!’ etc), it leaves you a little dumbfounded. When you see a kitchen knife and expect violence, Pig just gives you dicing and cooking.

If it’s a Cage masterclass, it’s only fair to praise Wolff too. The younger actor does much more than just slipstream along in his co-star’s wake. He strips away layers of yuppie bravado to lay bare a troubled relationship with his terrifying dad (Adam Arkin, also terrific) that barrels the film along to its unexpected denouement. Like those truffles that kick it into gear, this film is a rare treat.

In UK cinemas Aug 20 and available on altitude.film and other streaming platforms Aug 23. Available on PVOD in the US now.