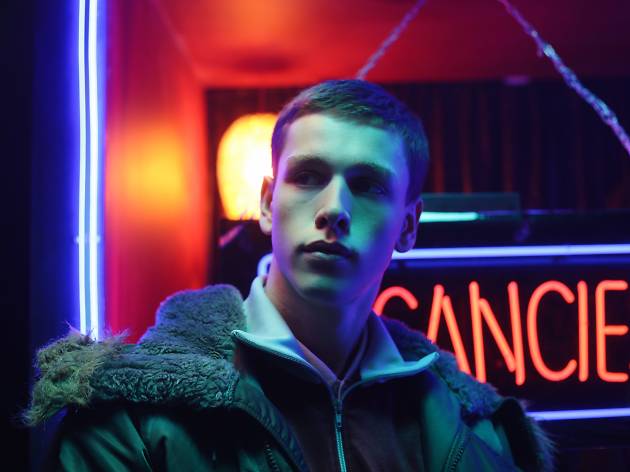 Pretension abounds in a gay Soho fantasia that's not nearly as provocative as it thinks it is.

A model-pretty Essex boy (Harris Dickinson, who starred in ‘Trust’) arrives in Soho looking for excitement. He’s taken under the wing of some other model-pretty boys who say stuff like, ‘You’ve heard of Velázquez?’ In his rough provincial gaucheness, he becomes a muse to an older ‘artist’ who says stuff like, ‘Living with Francis Bacon was no bed of roses, I can tell you.’ Soho is represented by some neon tubes, which say stuff like ‘Girls Girls Girls’. It’s either pretentiously enjoyable or plain pretentious, depending on your tolerance for Wikipedia-like exposition about Caravaggio.

Call it a bildungsroman, call it a picaresque journey, call it a saddo wank-fantasy, ‘Postcards from London’ makes you wonder – literally continuously – if you’re missing something. It is so arch and silly and cliché-ridden that the non-lizard part of your brain is screaming, ‘It’s ironic, it’s pastiche, it’s not as bad as it looks.’ The entire 90-minute film is shot on a soundstage, and this unwillingness to engage with anything approaching the reality of London creeps, miasma-like, into every corner of the film. It’s a musical with no songs. The sexuality, the exploration and the self-discovery are as dated, self-conscious and horribly empty as the look. I guess that the messily conflicted reality of twenty-first century Soho simply didn’t fit with the glacial concept.

To be fair to Dickinson, he does an okay job with the main character, given the absolute wretchedness of the material he has to work with. No pun intended, he plays it straight amid all the clunking nods to Derek Jarman, Jean Paul Gaultier and David LaChapelle, and emerges from this messy movie with something approaching credit. Soho may never be the same again, though.

Director:
Steve McLean
Screenwriter:
Steve McLean
Cast:
Harris Dickinson
Jonah Hauer-King
You may also like
Share Tweet
Popular on Time Out
Be the first to know