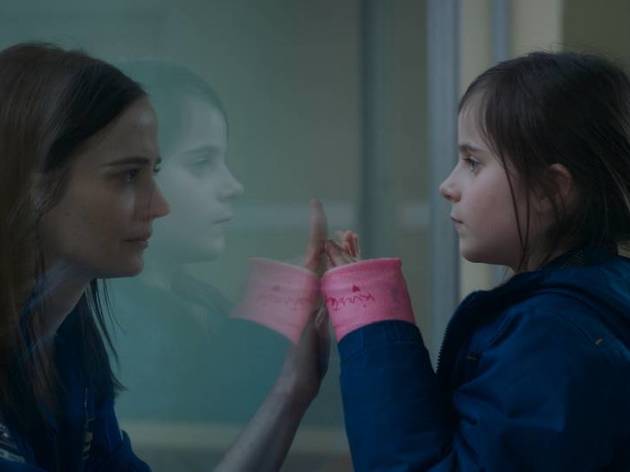 Proxima is the name of a flare star 4.2 light years away from Earth. It is also the name of the International Space Station that will transport French astronaut Sarah (Eva Green), American astronaut Mike (Matt Dillon) and Russian astronaut Anton (Aleksey Fateev) on a year-long mission to Mars. This will be Sarah’s first time in space. Her ex appreciates the gravity of this opportunity and takes custody of their eight-year-old daughter Stella (Zélie Boulant) and pet cat Laika, installing them in his German home. Dialogue slips between French, English, German and Russian in the multilingual realm that is Alice Winocour’s third feature as director. Hers is a space between nations, between planets and between domestic norms.

Viewers expecting sci-fi spectacles akin to the coloured-light sequence in Stanley Kubrick’s 2001: A Space Odyssey or the infinite void in Alfonso Cuarón’s Gravity will be in for a surprise. Proxima plays out on Earth, chronicling the physically intense preparations required of astronauts ahead of lift-off. Filming took place in real training facilities: the European Astronaut Centre in Cologne, Star City in Moscow and the Baikonur Cosmodrome in Kazakhstan.

Each day brings a gruelling regime, as we watch Sarah running on a horizontal treadmill, performing time-pressure tasks underwater and being swung around by a giant electronic arm. Spicing up what feels like a meditative training montage are the emotional stakes of the mother-daughter relationship, and the merest whiff of gender tension. As both a space ingenue and a woman, there is a lot for Sarah to prove to her male teammates. Mike, who initially presents as a boorish yank, rubs her up the wrong way more than once. Eva Green gives a resolute performance, gulping down emotions, as she strains to demonstrate her right to be on this mission.

Pressure mounts as the new distance in her relationship with Stella leads to cracks. They keep in touch via phone and with occasional visits, but Sarah is missing key events, like Stella settling in at a new school, and breaking her arm. Under her stoic front, Sarah loves her daughter with a fierce, unyielding passion. Green does exquisitely layered work, letting her guard slip for the odd second to show the conflict raging inside, and then zipping it away under a bodysuit and a Terminator sheen. Zélie Boulant shows up with equal presence. She has the poise of a mini adult, and it’s only when she sits cross-legged under a table or shouts ‘I hate you’ at her mother that you remember her tender age.

Winocour does brilliant work at enlarging the minute details that define the way the wind is blowing in this relationship. When Stella hurts, Sarah hurts – a sensation that she hides from colleagues, meaning her emotions become increasingly small and internalised. Disappointments disappear into the subtext as Sarah rushes to the next training session, and later resurface, fed into the next domestic scene. The emotional beats are subtle and understated until an impulsive finale that symbolises the giant leaps that this mother will make to allow her child to keep the faith.

Out in US theaters Fri Nov 6. Available to stream in the UK now.