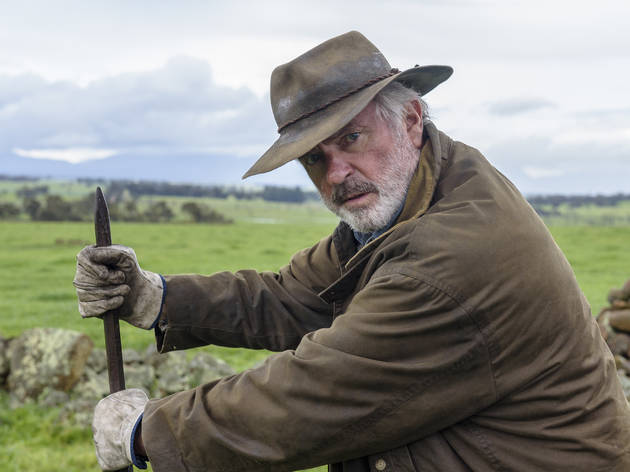 There once was a time when the fate of Australia’s economic prosperity was said to ride on the sheep's back. Wool was the sunburnt nation’s biggest export to the world, rather than planet-burning fossil fuels. It’s in this spirit that director Jeremy Sims (Last Cab to Darwin) translates the bittersweet chill of dark-edged Icelandic comedy Rams onto Australia’s bushfire-blasted soil.

Working from an adapted screenplay by Jules Duncan, Sims corrals snappy, sweary humour that hangs with heavier drama as two estranged brothers face the total devastation of their neighbouring Merino sheep farms. Sims taps not the entirely Australian (but claimed like Russell Crowe) Sam Neill into service. Forget Kiwi jokes about sheep; there’s something about his stoic, salt-of-the-earth charm wrapped in denim and a wide-brimmed hat that neatly epitomises a certain kind of gruff Aussie archetype.

The real-life vineyard owner totally convinces as Colin, a man of few words who has said a grand total of zero to his brother in forty-odd years. Michael Caton (The Castle) plays older sibling Les, a cantankerous drunk who’s trigger-happy with his shotgun. Thankfully, their beef (lamb?) is mostly confined to an annual competition between their finest rams, as judged by a somewhat less convincing Miranda Richardson as an imported British vet.

Then an outbreak of the highly contagious Ovine Johne’s disease shatters their tenuous peace. Necessitating the destruction of both their herds – and the rest of the region’s – it pushes them to the edge. But the brothers aren’t very good at doing what they’re told, resulting in an eye-opening scheme concealed from an officious city inspector summoned from Perth. Played as a distracting buffoon by Leon Ford, his performance doesn’t sit well with the more melancholy-tinged humour deployed by the rest of the cast, including, but doing very little with, The Cry star Asher Keddie.

While this remake hails from a very different world from the original, a Cannes award winner, it mostly works. Deadpan Aussie dramatic comedy is a good stand-in for Icelandic quirk, even if a little of the original’s heft is lost in shaving off its curlier plot points. Overlong at north of two hours, they could have trimmed some of the Tourism Australia-delighting sweeping drone shots of the picture-perfect Mount Barker region of remote Western Australia. But all that can be forgiven for an excellent visual joke about growing a very different type of grass in a hidden hydroponic closet. Now that is the true Aussie spirit.

Available to stream in Australia now. Out on VOD in the UK Feb 5.