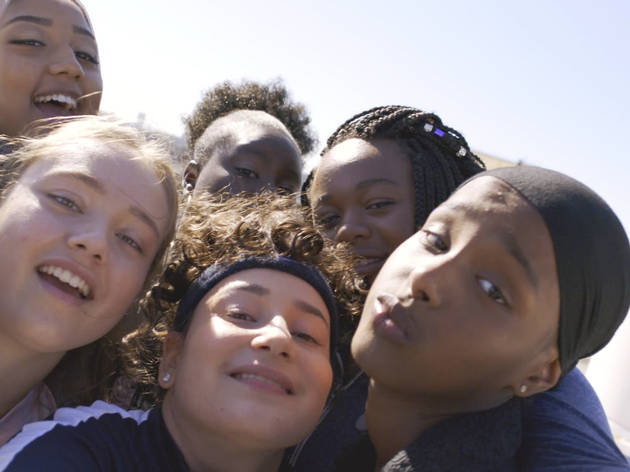 A group of schoolmates gather on an east London rooftop. In the distance, the City’s ivory towers gleam, but they’re barely noticed as the friends laugh, chat, take selfies and throw out an impromptu a cappella ‘Proud Mary’ as the sun goes down. A life-affirming celebration of female friendship, ‘Rocks’ asks you to hold this opening image in your mind when one of them is later advised by a teacher to give up her ambitions of becoming a lawyer. ‘It’s good to have a back-up,’ she’s told. How do you grow up in a city where half of it feels so far out of reach?

A realist drama with a loose, unaffected touch, ‘Rocks’ is a unique collaboration between director Sarah Gavron, its two writers and a young cast that are mostly still in school. It rides shotgun with Shola ‘Rocks’ Omotoso (Bukky Bakray), a British-Nigerian teenager who lives on a Hackney council estate with her struggling mum and dinosaur-obsessed younger brother (D’angelou Osei Kissiedu). Soon mum is gone, leaving only an apologetic note and a few quid.

A big-sis-and-little-brother journey from fleapit B&Bs to friends’ sofas ensues, as Rocks tries to swerve the social services officers loitering outside their flat. It’s a deadening, dead-end path and Rocks knows it. She just doesn’t know what to do instead.

Authored by Theresa Ikoko (a British-Nigerian Hackney-ite herself) and co-written by Claire Wilson, the screenplay emerged from a year-long workshopping process with the young cast. And you can tell: Rocks’s journey is authentic and real, but never feels kitchen-sinky and heavy. It’s a credit, too, to the acting chops of these vibrant first-timers, cast via a series of open workshops in London schools and youth clubs. Bakray is a natural, sparking beautifully with fellow first-time actor Kosar Ali as Rocks’s best mate Sumaya, and seven-year-old Kissiedu is great as her kid brother. In one scene, he will leave your heart on the cinema floor.

Behind the camera, you can sense a filmmaker who knows when to direct and when to let her young stars just be themselves. You often have to stop trying to catch the lines of dialogue and just tune in to the happy hubbub of their frequency. ‘Rocks’ reverberates with that kind of noisy authenticity. Tampon advice is shared in the school loos, dance moves are busted out, and Instagram and Snapchat are ever-present to capture the moment.

The result is a gritty but giddying human drama that plays like a glorious mix of ‘Precious’, ‘Girlhood’ and ‘The 400 Blows’ – a huge-hearted coming-of-age story that serves as an inadvertent throwback to the easygoing buzz of hanging out with your friends in the city you call home. And London deserves one of those right now.