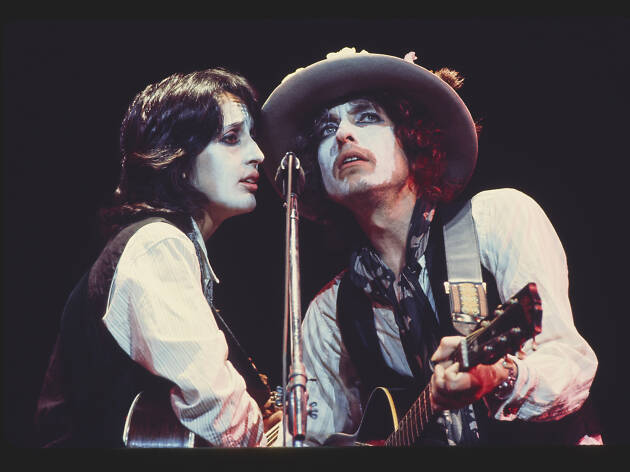 Bob Dylan certainly gives good Bob Dylan in Martin Scorsese’s new concert film/documentary. Back in 1975, a cameraman asks the singer at the end of a blistering gig during his Rolling Thunder Revue tour how it was. ‘How was what?’ responds the famously oblique musician. When asked to comment on the same tour now, he says it was ‘about nothing – it’s just something that happened 40 years ago. It happened so long ago I wasn’t even born.’ So begins, from one of music’s most revered figures, the utter irreverence.

The Rolling Thunder Revue was a wilfully eccentric tour. Itching to play smaller venues, an exceptionally freewheelin’ Dylan went on the road with a revolving door of folk all-stars, followed by access-all-areas cameras for a film that never happened. Today, Scorsese intercuts it with new interviews, contextualising it all with the times that were a’changin’. ‘People seemed to have lost their conviction for just about anything,’ says Dylan, whose own politics come to the fore during a scorching 1975 performance of ‘Hurricane’ at Trenton State Prison, where boxer Rubin ‘Hurricane’ Carter was being incarcerated on a false murder charge.

The film is full of stolen moments – Dylan and Allen Ginsberg visiting Jack Kerouac’s grave, impromptu jams at house parties, a young Sharon Stone in thrall of Dylan. It rarely strays from the man himself, but if you’re here for him, it’s more than enough. His retrospective musings are lyrical treasures. For instance, on musician Ronnie Hawkins: ‘He looked like a shit-kicker but he spoke with the wisdom of a sage.’ Poetry.

There’s a lot of playfulness here – it's high-level Dylan Studies. Just as the singer often wore a magician’s white face on this tour (or even a plastic mask), Scorsese is having fun infusing his flow with subtle fictionalisations that may outfox you. (Among his co-conspirators is ‘M*A*S*H’s Michael Murphy, appearing as ‘presidential candidate’ Jack Tanner.) Like Dylan’s description of Hawkins, Scorsese’s doc appears like one thing but sounds like another.

Director:
Martin Scorsese
You may also like
Popular movies
We know this city. Do you?