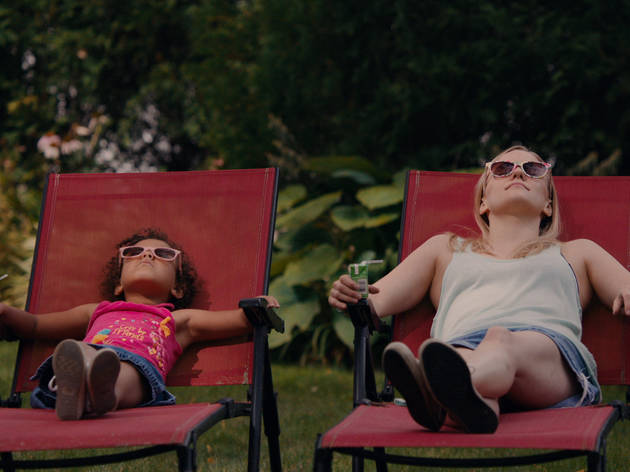 Writer-star Kelly O’Sullivan’s sort-of comedy Saint Frances is like a series of short stories: a series of perfectly landed psychological points about identity, responsibility, dreams and reality. It’s been getting plenty of attention for its ongoing motif of female bleeding – initially sex on your period; later, lead character Bridget’s abortion aftermath. It’s the goriest film you’ll see this year that involves no guns, axes or zombies, but its gross-out/empowerment duality acts as a metaphor for a whole host of less visible social and emotional taboos.

Bridget (O’Sullivan) is a 34-year-old white waitress who somehow becomes a nanny to six-year-old Frances. Frances’s ‘Mommy’ and ‘Mama’, Maya and Annie, embody the latter-day progressive American dream: mixed-race, gay, liberal, middle-class, successful. Frances is nourished with every kind of positivity about herself and her identity, yet sidelined for the couple’s newborn son Wally. Meanwhile, Bridget chafes under a role that she feels neither capable of nor suited to.

Saint Frances poses all sorts of questions about who we are and what is right, but it does so so subtly that you find yourself constantly second-guessing it, often wrongly. There are heart-in-mouth moments where it looks like it could be about to defend anti-abortionists, or deliver some kind of pro-Christian message. Then you have to analyse your assumptions all over again.

Is Bridget a privileged slacker or an emotionally honest byproduct of an empty, status- and social-media-obsessed society? Are Maya and Annie inspiring, or a pair of entitled nitpicking stiffs? Are kids awesome, or stupid and annoying? Obviously, the answer to all of these is ‘a bit of both, depending’. Less obviously, Saint Frances analyses how we often entrust what is most precious to the indifferent, and how parents can neglect their children without even realising it, however doting and well-heeled they are.

It’s a film full of neat touches – Bridget stalks across Maya and Annie’s front lawn when she leaves their house, like a teenager – and nuanced performances. O’Sullivan is likeable and unlikeable; Charin Alvarez and Lily Mojekwu are completely believable as Maya and Annie, and Ramona Edith Williams is perfect as Frances: brattish through boredom, but a more human and rounded realisation of her parents’ values than they appreciate. Its takeaways are empathetic and relatable: life is messy. It can be lonely being a child. And an adult.

Out in UK cinemas in July.