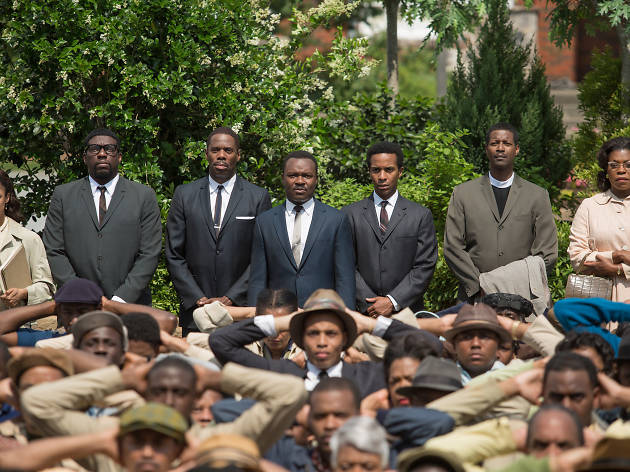 This 1960s-set, US civil-rights drama works brilliantly as both expert historical re-creation and a powerful reflection of what’s happening in the world right now. As recent events in Ferguson, Missouri show, there’s nothing ‘finished’ about the issue of racism in America or beyond. Fittingly, ‘Selma’, unlike so many great-man biopics, lures us into a web of unsettled arguments and shifting strategies as Dr Martin Luther King Jr (David Oyelowo) makes his landmark 1965 Alabama march a reality – at a terrible cost. The film plays like a great episode of ‘Mad Men’, pitch-perfect in its details yet totally lived-in: a universe of rolled-up shirt sleeves, sweaty brows and screams that sound horribly real.

‘Selma’ glides between moments big and small. Early on, the 16th Street Baptist Church bombing in 1963 – an act of homegrown terrorism that inspired King's drive to action that followed – isn’t announced so much as eased into, as four impeccably dressed girls descend a stairwell, chatting about hairdos. Then we see King grumbling about his fancy tie, helped by his soothing wife, Coretta (Carmen Ejogo), before walking out to accept his 1964 Nobel Peace Prize. His work is far from done: even as his team makes its way to Alabama to set up an HQ there, King’s reputation precedes him, and he's punched in the face in a hotel lobby.

But ‘Selma’ truly takes off in the way it describes the back and forth behind great events. Oyelowo brings massive conviction to King’s rousing sermons but he’s even better in quieter moments, insisting to worried activists on the need for ‘drama’. The plan for a 54-mile march through scary backwoods develops over scenes, as does an equally riveting bit of gamesmanship between President Lyndon B Johnson (Tom Wilkinson) and racist Alabama governor George Wallace (Tim Roth, transfixing), who sketches out a shockingly pragmatic compromise.