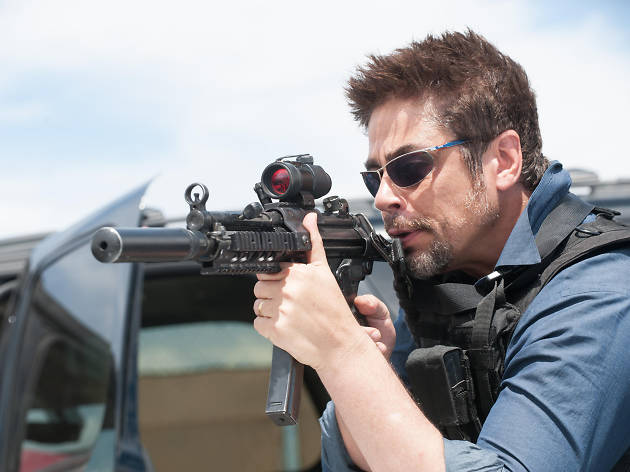 Clawing his way up the power ranks of Directors Least Likely To Make A Romantic Comedy, Denis Villeneuve takes on the Mexican drug trade in this stern, robust, abandon-hope-all-ye-who-enter thriller. And during its throat-grabbingly effective opening, it seems he may have the final word on this oft-visited genre. As an FBI team, headed by Emily Blunt's stoic agent Kate, literally crashes an Arizona drug-cartel hideout, a gruesome cache of human corpses is uncovered behind the drywall – and the filmmaking practically gives off its own vivid, indignant stench. Cinematographer Roger Deakins's dynamic camera forces us to look where we'd rather not; Johann Johannsson's score swarms with malevolent foreboding. Even as he borrows from other movies' hellish visions – some of the most arresting imagery here feels lifted from Amat Escalante's 2013 Cannes winner ‘Heli’ – Villeneuve knows how to overwhelm his audience.

That panicked pitch, however, is tough to sustain across two hours of beautifully wrought moral turpitude that nonetheless doesn't contain many stunning revelations. Kate is drafted into a mysterious, agency-merging task force established to bait and bring down a key cartel leader, though her requests for information are blocked at nearly every turn: she's not even sure if her rule-bending team leader (Josh Brolin, on strong, non-stick form) belongs to the CIA or not. Still, he's a positive chatterbox compared to Alejandro (Benicio Del Toro, superb), a quietly lethal ex-prosecutor with a personal stake in the hunt. Good guys and bad guys largely wear the same hats in this ethical minefield, but that's hardly news: as in Villeneuve's similarly nasty, formidable ‘Prisoners’, ‘Sicario’ occasionally seems a little too impressed by its own nihilism. Still, this is an involving, grown-up film from a director whose muscular technique continues to impress: one might call it pulp in the same manner one would a plate of minced meat.