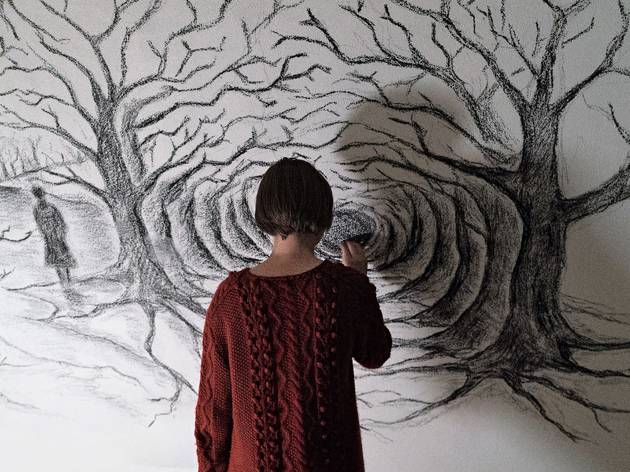 A beguiling drama that sits midway between dark realism and fantastical fairy-tale.

Set in a small Sicilian town that’s cradled in a picturesque, rocky valley and fringed by a shadowy forest, there is a sense that Fabio Grassadonia and Antonio Piazza’s film takes place on the very fringe of the ‘real’ world – where there is still some fairytale magic, both beautiful and deadly. It’s a feeling encouraged by the directors’ languorous, almost bleary visual style, their deft use of natural imagery, and a story viewed through the prism of a fiercely imaginative teenage girl. Who, rather noticeably, likes to wear red.

Since screening at the Cannes Film Festival in 2017, ‘Sicilian Ghost Story’ has drawn comparisons with Guillermo del Toro’s ‘Pan’s Labyrinth’ for the way it folds Grimm-style fantasy into bruising reality. But there are no elaborately rendered, eldritch monsters here – or indeed ghosts, in the traditional sense. The emphasis is more on the real-world drama surrounding the disappearance of 13-year-old Giuseppe (Gaetano Fernandez), the son of a Mafia snitch who is snatched suddenly out of the life of his girlfriend Luna (Julia Jedlikowska) just after they share their first kiss.

While we do witness the atrocities inflicted upon Giuseppe – and they do not make easy viewing – the emphasis is squarely on Luna, who is frustrated that more is not being done to find her sweetheart, and resolves to find and rescue him herself, using the dream-seeded clues she believes he’s sending her.

As the timeline stretches, the story’s pace slackens and the film loses focus and a little of its power; like Luna itself, it seems unsure if it should move on or stay faithful to its ‘ghosted’ victim. But come the finale, it rallies once more, with a suckerpunch of an ending that’ll leave you shaken.