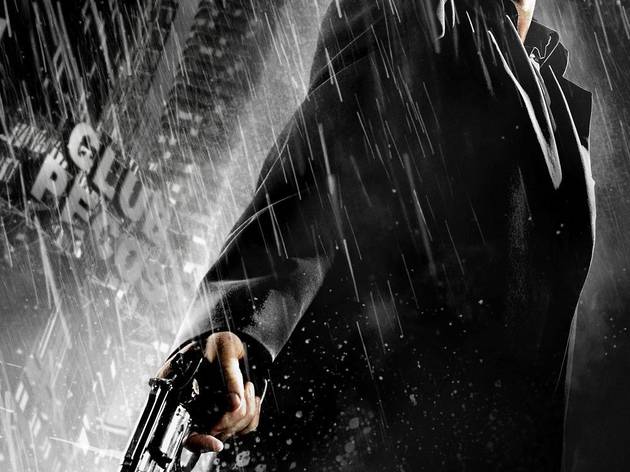 Pulped to shreds and hard-boiled to bitumen, Basin City occupies a hyperfictional, nocturnal territory between film noir and action comic, James Ellroy and Will Eisner – the kinda place where men are vengeful muscle, women are curves for hire, and heart attacks, bullets and the chair are for pansies. While its two-fisted vendettas won’t pop everyone’s cork, there’s no denying ‘Sin City’s’ technical achievement: adapted with astonishing fidelity from Frank Miller’s characteristically smart-macho graphic novels, the movie marks a new watershed in CGI film-making, its green-screen performances and digitally rendered environments slickly meshed to yield the sort of aesthetic cohesion and expressive interiority so palpably lacking in the equally stylised Lucasverse.

The ‘Pulp Fiction’-style structure offers three peripherally interlocking tales: Mickey Rourke’s conscientious brute investigates the slaying of tart-with-a-heart Jaime King; upright Clive Owen takes on slimy Benicio del Toro with the help of an army of Valkyrie-whores; and, bookending these, Bruce Willis’s cop Hartigan defends a young girl (who grows into Jessica Alba) from the psycho son of a senator (Nick Stahl’s sickly Yellow Bastard). Stand-out here is Rourke, bringing weary, wry resolve to a prosthetically sculpted, increasingly bandaged face that comes to resemble a granite cliff that a flock of gulls has smacked into. But the stories are variations on the same righteously paternalistic revenge narrative, and by the end of Hartigan’s tale (the most ethically queasy) the sadistic vigilantism and stock characters – including a notably crass Irish paramilitary – have relentlessly pummelled their points home. (Even Rodriguez’ credit reads ‘shot and cut’ rather than ‘photographed and edited’.) Still, the look of it remains exceptional, a high-contrast monochrome showcase of sheeting rain, shattering glass and white-on-black silhouettes, with occasional motifs picked out in vivid colour – a red dress here, green eyes there. Most striking is the single instance of flesh-coloured flesh; a too-rare flicker of human feeling.