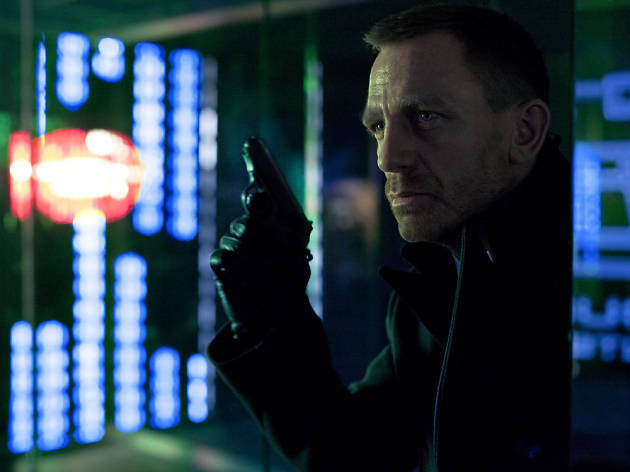 ‘Were you expecting an exploding pen? We don’t really go in for that anymore.’ That’s Ben Whishaw’s Q to Daniel Craig’s James Bond in ‘Skyfall’ – a Bond movie that boldly struts forward while looking back over its shoulder to the past. That’s what the 007 films are all about – an evolving mix of tradition and progress – and here we have director Sam Mendes (‘American Beauty’, ‘Revolutionary Road’) bringing to the franchise a stately look, sombre mood and ample room to breathe. Saying that, the fiftieth anniversary of the 007 movie project demands the odd knowing wink, to the likes of the classic Aston Martin DB5 from ‘Goldfinger’ and even the crocodiles that Roger Moore hops across in ‘Live and Let Die’.

The Bond films are savvy magpies, smartly pinching the shiniest, newest jewels of moviemaking for themselves. 2008’s ‘Quantum of Solace’ came a cropper by putting its hand too obviously in the till of the ‘Bourne’ films. But ‘Skyfall’ much more subtly takes its cues not only from the current, moodier breed of superhero movies, but also from the world around us. There are nods to terrorism, data theft, hacking and even attention-grabbing government inquiries – but nothing is specific or exact enough to mean anything significant. This is a Bond movie: atmosphere is all. The appearance of contemporary relevance is enough.

The story sees Bond in an emotional crisis after a failed mission to Istanbul leaves the names of secret agents in the hands of an unknown villain. Trips to Shanghai and Macau follow as 007 pulls himself together and tries to find the culprit for Judi Dench’s M and Ralph Fiennes’s Mallory, her Whitehall superior. There’s trouble at home, too, as a bomb explodes in the MI6 building in London and it becomes clear that M is under threat.

Meanwhile, a delicious foe emerges in Silva (Javier Bardem), a camp, creepy and smooth character who dares to challenge Bond’s masculinity in an arresting scene in which his hands run up 007’s legs. But the film’s many commercial sponsors can rest easy: Craig’s harried, stern Bond is as inscrutable and wordless as ever. He has plenty of welcome one-liners (‘I’m just changing carriages,’ he quips, leaping from the roof of one train car to the next), but delivers them like someone cracking gags at a funeral.

‘Skyfall’ is a highly distinctive Bond movie. It has some stunning visual touches: motorbikes racing along the roof of Istanbul’s Grand Bazaar; the neon playing off the precipitous glass of a skyscraper in Shanghai; the Scottish landscapes of its bleak finale. Also, it mostly manages to convince us that there’s something at stake by giving a hint of Bond’s emotional life beyond this story: rooting his crisis in his relationship (or lack of) with his parents, without coming on too heavy-handed or pleading with the psychology.

Mendes knows there’s a risk of coming over po-faced by omitting the traditional pleasures of a Bond movie, and his approach seems calculated to stick to the formula while moving things forward. Still, the role of the Bond girls, played by Naomie Harris as a MI6 colleague and Bérénice Marlohe as a femme fatale, feel token and underwhelming. The tourism element of ‘Skyfall’ – especially the Macau section – is awkward too.

It’s only in the second half of the film, which takes place entirely in the UK, that you get the feeling that Mendes has played the compulsory 007 cards that any Bond director has to. Now he’s properly able to get stuck into a more punchy, more unified mix of action, emotion and story that climaxes in a fittingly isolated and lonely final showdown between Bond and his latest nemesis.