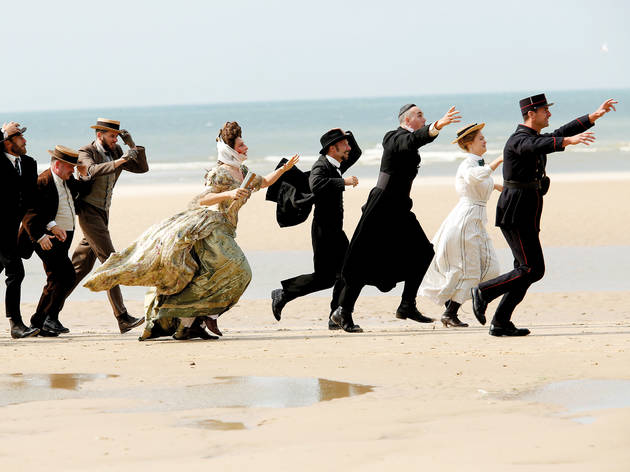 There was a time, not long ago, when the words 'a Bruno Dumont comedy' were about as alluring to film fans as 'a Holocaust drama by Nancy Meyers'. If you wanted severe formalist meditations on faith and physiognomy, this French filmmaker was your man. But his films were markedly low on the LOL factor. That changed two years ago with his darkly daft, hilarious serial-killer farce 'P'tit Quinquin'. Dumont is still in a mordantly merry mood, as this alternately buoyant, bleak and thoroughly bananas seaside ramble makes delightfully clear.

The title refers to a gusty, desaturated-looking beach settlement on the northern coast of France - suitably desolate, the area has long been Dumont's favoured playground for his films - where the well-to-do, parasol-toting Van Peteghem family ill-advisedly chooses to spend their summers in the early twentieth century. 'Slack', however, proves to be unashamedly the key adjective here, as Dumont dawdles at leisure over the addled clan's various quirks and complications. Preening patriarch Andre (the ever-amusing Fabrice Luchini) concerns himself with sand-yachting and ogling local seamen, while his pallid wife Isabelle (Valerie Bruni-Tedeschi) has trouble enough standing upright.

They're accompanied by their two young daughters, as well as their roaming, genderqueer niece/nephew Billie (Raph), whose shrill, gussied-up mother Aude (an uncharacteristically loose-screwed Juliette Binoche, not so much hamming it up as serving an entire pork terrine) turns up to drive pretty much everyone dilly with her fretting and frippery. And that's before she learns Billie has taken up with jug-eared local fisherman Ma Loute (Brandon Lavieville), whose lowly class status should be the least of mum's concerns: suffice to say his enjoyment of human flesh goes beyond the carnal.

Between the upstream-downstream class tensions, an adolescent's tussling with her sexual identity, Aude's unhinged religious devotions and the suggestion of a very warped family tree, 'Slack Bay' sweeps some weighty matters into its breezy absurdism. When a cannibalism subplot counts among the film's larkier distractions, it's clear we're in the mouth of madness. But in a story that sometimes musters tender sympathy for society's misfits, Dumont's mismatched clash of whimsy and grotesquerie feels fitting. When it's not aiming for something that complex, it's got some good clean slapstick to tide us over: even Bruno Dumont, it turns out, appreciates the simple pleasures of a broken-deckchair gag.