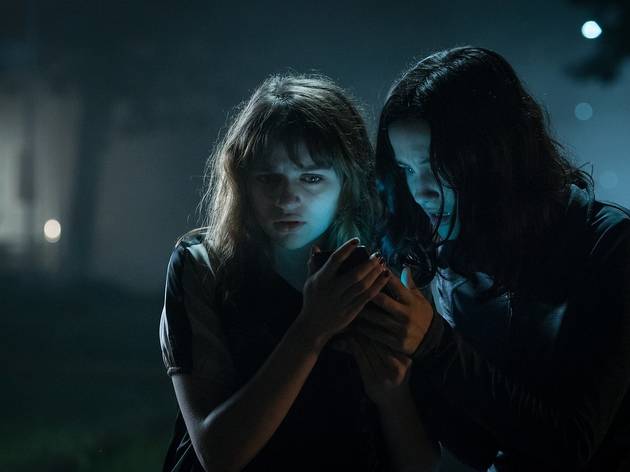 This unscary horror film is as thin and vaporous as its internet-based stalker.

For those uninitiated with the world of ‘creepypasta’ (the term for internet-propagated urban legends), Slender Man is a gaunt, faceless figure who went viral earlier this decade, generating countless memes – and, tragically, inspiring two young girls to attempt to murder a classmate. This sad story could have been turned into a compelling study of obsession, but instead, ‘Slender Man’ is a generic bogeyman flick best suited for background viewing at teen sleepovers.

In fact, it’s at a girls slumber party where a quartet of high-schoolers first decide to summon Slender Man online, mostly because they think some guy friends are doing the same thing (setting up a potentially scary plot twist the movie never follows through on). ‘One week later’, as an ominous title tells us, Katie (Annalise Basso) mysteriously disappears, leaving Wren (‘The Conjuring’s Joey King), Hallie (Julia Goldani Telles) and Chloe (Jaz Sinclair) to confront the possibility that Slender Man is real and coming after them.

As they investigate, they have a tendency to explain obvious points to each other. One of them insists on denying what’s clearly happening to stretch out the film’s running time, and director Sylvain White stages an annoying number of it’s-only-a-dream hallucination scenes and “gotcha!” false alarms. Given that Slender Man lives in the computer realm, it’s only appropriate that the dude himself feels like an obvious CG creation, but this diminishes the real-world stakes.

White and cinematographer Luca Del Puppo catch effective small-town-after-dark atmosphere in the early goings, even as the movie fails to understand that it’s the characters’ fixation on Slender Man – and not the phantom himself – that should be driving the terror. (If you want to know what’s really frightening about him, catch HBO’s 2016 documentary ‘Beware the Slenderman’). Give this literally and figuratively bloodless spooker a pass.