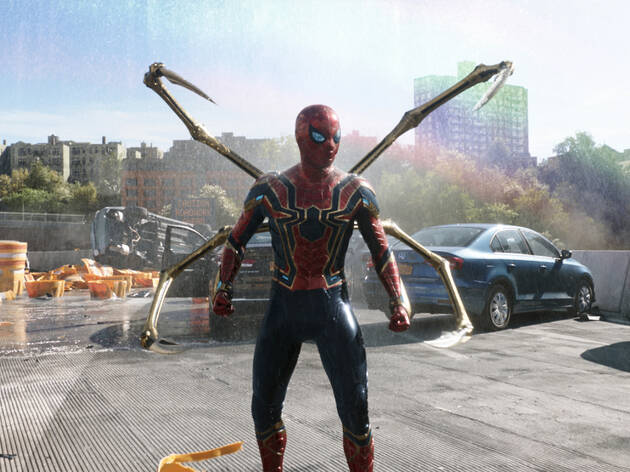 Spider-Man was created as a (then) rare example of a superhero whose life was made markedly worse by having superpowers. For all the exhilaration and possibility that his abilities gave him, they also came with crushing responsibility and did nothing to alleviate the pressure of schoolwork, and making ends meet, and his obligations to family and friends. Spider-Man is always best on the back foot, and this film puts him thoroughly through the wringer. But it also gives him room to shine, and packs an emotional punch that could floor any of his villains.

Last time we saw Tom Holland’s Peter Parker, he was outed as Spider-Man to the whole world and accused of murder. In the fallout of that revelation, he and his family are under siege by the authorities and by shock jock J Jonah Jameson (JK Simmons) leading a hostile media. Desperate for a way back to normality, he asks Doctor Strange (Benedict Cumberbatch) to cast a spell making everyone forget his identity, but something goes wrong.

Soon villains who know Spider-Man – but not this version – are turning up, and Peter must get them under control and figure out a way to get them all back to their home dimensions.

There’s a lot of plot in this film, and some is garbled and muddy, but it nails its emotional beats. Peter’s relationships with girlfriend MJ (Zendaya), bestie Ned (Jacob Batalon) and aunt May (Marisa Tomei) are kept front and centre of his priorities, and his challenges are as much moral as physical. How should he deal with all these villains without putting those around him at risk? And what responsibility does he have to put everything right?

The film soars when it makes time for Peter to breathe and stew over all this, ideally with his nearest and dearest around him, and his scenes with MJ and Ned are breezy and charming again. Some of the action feels a little rote, taking place in the faintly uninspiring likes of a deserted forest or that Hollywood favourite, a highway exit ramp.

But the characters work, and director Jon Watts manages to weave together the disparate styles of villainy from previous films in a way that hangs together. There are genuinely touching moments of redemption, and closure, and humour for characters we might have lost forever.

Most of all, this makes you care about Peter Parker and feel deeply for him. More than anything else – and particularly in Holland’s hands – the character is a good guy, someone who tries to do his best for other people and who sacrifices a lot to do the right thing. That isn’t something that’s pat or easy – quite the opposite – but it’s the core of who he is, and the challenges of being, and doing, good are the shining heart of this film. And those moments sing.