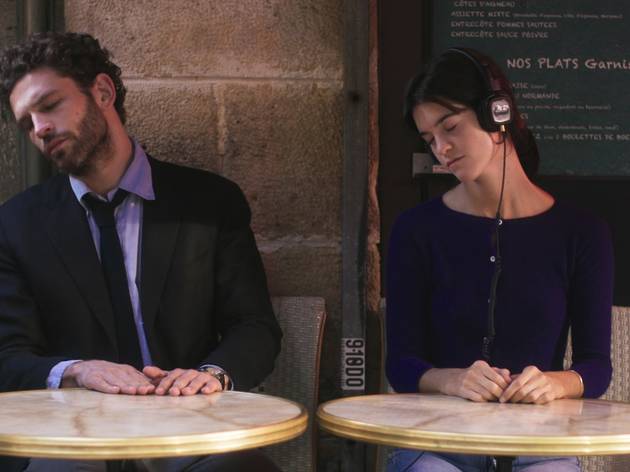 The Place Charles Dullin, in the lower reaches of Montmartre, is one of those Parisian squares that is always so damn busy it feels like its own self-contained world. People come and go, kids hang, there’s always a spot waiting for you at the café-terrace. This sprawling quartier acts as the stage for Suzanne Lindon’s debut feature Spring Blossom: an age-gap romance that sweeps you up in the joys and disillusions of youth.

Making us all feel like underachievers, 21-year-old Lindon (daughter of actors Sandrine Kiberlain and Vincent Lindon) directs in a confident and cheerily brisk style – while also playing a version of her 16-year-old self. This Suzanne is bored. She doesn’t fit in at parties, the conversation is crap. Her parents (Florence Viala and Frédéric Pierrot, particularly loveable) are a little too sweet. Everything – and everyone – is embarrassing.

Then she meets an actor at the local theatre, Raphaël (a moody and rugged Arnaud Valois), who somehow seems just as fed up with his lot. He’s 35, which makes their liaison questionable, but the film avoids overt sexuality in favour of simple emotions that make you long for the fun and freedom of early adulthood.

It helps that everything is seen from her perspective. She’s fleetingly enamoured. Who is this bloke with a motorbike who parks up outside the theatre? She engineers another accidental meeting. And another. Their affinity is their ennui, the sense that their life is on pause – even if it isn’t, really. Creepiness should factor in, but we find out little about Raphaël and his motivations. Instead, it is the Suzanne show; fortunately, for the most part, she seems to be in control.

The film has some perfect moments: a trio of dancing scenes that make for a joyful departure from an otherwise quite naturalistic filming style. One sees Suzanne carousing down the street when they agree a date; another has her and Raphaël wiggle a choreographed routine during one of their awkward café meet-ups. They are the film’s purest, most engaging parts, and bring to mind the classic café scene from Godard’s Bande à Part.

At only 72 minutes, Spring Blossom whizzes by and ends a little abruptly. Some may go away unsatisfied, but others will see in Lindon an impressive young talent to be reckoned with. The age gap was obviously intended to provoke, yet Lindon ensures the focus is on her performance. And it brims with nuance and promise – not unlike her filmmaking.

Available in the UK on Curzon Home Cinema Apr 23 and in UK cinemas May 17.