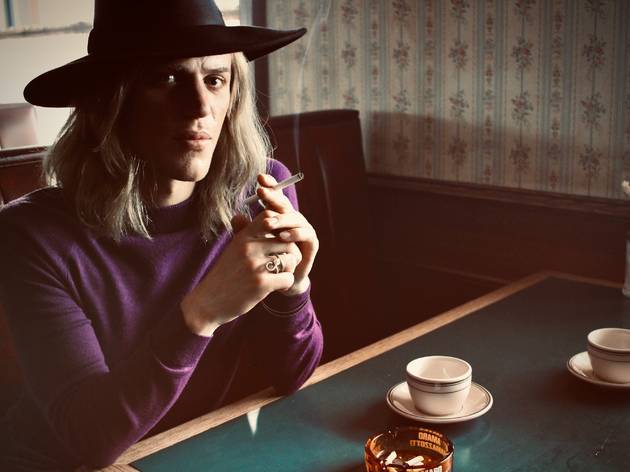 This mediocre Bowie biopic fails to reach the stars.

Rock biopics that don’t have rights to the artist’s songs can work, as seen in England Is Mine (Morrissey) and Nowhere Boy (John Lennon) – but both of these were set in their subjects’ late teens so the canon was nascent. In Stardust, we meet 24-year-old David Bowie (played by 36-year-old Johnny Flynn) in 1971. He’s on his first US trip, promoting his Led Zeppelin-esque third album The Man Who Sold the World, presented here as a hard sell because he wore a dress on its cover. You need to believe this young man becomes one of the greatest rock stars of all time. You won’t.

A one-hit wonder with Space Oddity, Bowie tries to behave like a star before he is one, but he’s written as a slightly pathetic, hippy rube who misses every opportunity his publicist (Marc Maron, always watchable) finds. In marked contrast to the real, ruthless, camera-ready and charismatic Bowie, he’s an unengaging wet failure, tortured by the fear of succumbing to the ‘madness in the family’. The severe mental-health problems of his half-brother Terry, seen in flashbacks, are treated crassly. While his wife Angie (Jena Malone) is a hectoring presence, a portrayal that overlooks the significant contribution she made to Bowie’s success.

Flynn, who sings the Jacques Brel and Yardbirds songs that Bowie recorded, works hard with a weak script. And some moments ring true: we hear a song by ’60s singer Anthony Newley, an early hero of Bowie’s; Bowie wears that dress for Rolling Stone – though the film erases his bisexuality, which is poor. But this biopic can’t sell the idea of his progression as a songwriter because it can’t show us the songs – including, notably, Life on Mars and Changes, which were both written around this time.

Ultimately, Stardust doesn’t really work on any level. And not having his music means it can’t truly let go, which makes this Bowie nothing close to the magnetic performer he was, despite a reasonable finale (with a Ziggy hairpiece in the wrong colour and inaccurate make-up). Seek out DA Pennebaker’s concert doc Ziggy Stardust and the Spiders from Mars or Todd Haynes’s camp, self-aware, fairytale Bowie biopic Velvet Goldmine instead – they’re much more fun than this.