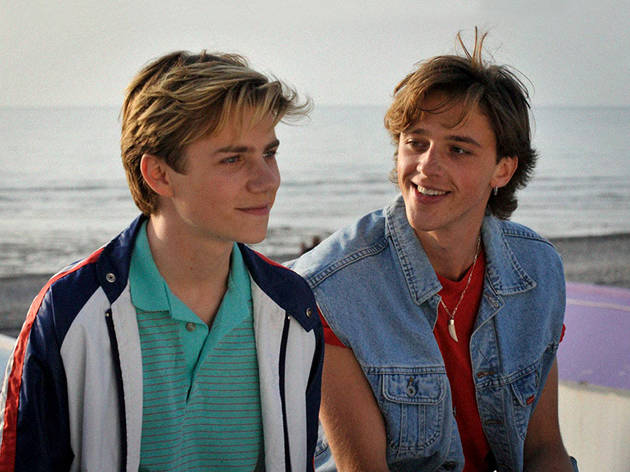 A kind of Gallic spin on the Hollywood ‘80s teen movie, François Ozon’s retro coming-of-age story keeps all the classic ingredients – the discos, the hair, the denim, the flick knives that actually turn out to be combs – and amps them up with an emotionally raw depiction of sexual awakening. It perfectly distills the every-second-counts urgency of young love, even if the final act overheats a little under the Normandy sun.

Summer of 85’s answer to Kevin Bacon is Benjamin Voisin’s 18-year-old bad boy, David Gorman, whose death is revealed early in a film that operates mostly in flashback. For 16-year-old Alexis, newly decamped to the drab Norman seaside town of Le Tréport with his gruff docker dad and hard-working mum, he’s a saviour: literally and figuratively. It’s David who sails, almost mythically, to the rescue when his dinghy capsizes at sea, and it’s David who brings some much-needed excitement and more than a frisson of attraction to his life.

There are plenty of alarm bells for Alex (he shrugs off the ‘Alexis’ in the spirit of a teenager shrugging off his parents’ dumb choices) in David’s careless charisma and fixation with death – something they both share – as well as his off-kilter home life. His mum (Valeria Bruni Tedeschi), with whom he runs a shop of maritime nick-nacks catering for tourists, is soon perving on him in the bathroom. None of this can end well. Alex probably knows it, but the spell is far too heady to be broken.

Ozon’s source material is a YA novel by English writer Aidan Chambers, Dance on My Grave, though he switches the location from a nondescript English seaside town. The film’s flashback/flashforward structure works nicely, cross-cutting between Alex and David’s relationship and a procedural investigation into David’s death that may or may not implicate Alex, although some of the story beats that might work brilliantly on the page feel a bit naff on the screen (a fairground fistfight tips into pastiche Americana and a cross-dressing bit jars in context). Still, if Summer of 85 isn’t Ozon firing on all cylinders, it’s easy to get lost in its blissed-out evocation of first love.

In UK cinemas and streaming on Curzon On Demand Oct 23.