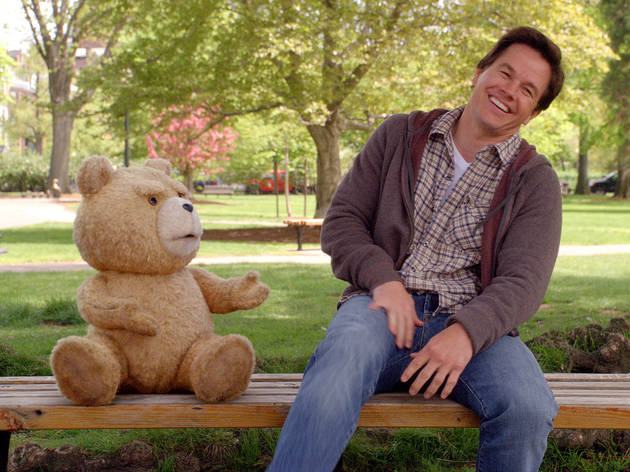 As the pop-culture-addled brains and head potty mouth behind the animated TV series Family Guy, Seth MacFarlane has carved out a niche as a genius of throw-everything-against-the-wall humor. (His voicework is equally all over the map, with MacFarlane switching from ’50s crooner to blue-collar lunkhead to baby-as-Bond-villain in a single beat.) That scattershot sensibility is all over his first live-action feature, with punch lines involving Katy Perry, Susan Boyle, Lance Armstrong’s cancerous testicle, the theme to Octopussy and—the film’s most fertile running joke—the cheesetastic glory of 1980’s Flash Gordon whizzing by at warp speed. MacFarlane may be the only person who’ll blatantly ape the Zucker brothers' style and make an actual Zuckers reference (one scene quotes Airplane!’s homage to Saturday Night Fever—a triple meta score!), but the real comic payoff lies in Ted’s simple conceit: a lonely boy miraculously wishes his teddy bear into becoming a real live friend. Cut to 30 years later, the now-grown man (Mark Wahlberg) is doing bong hits and talking f-bombed trash with his enabling, immature furry buddy (voiced by MacFarlane), much to the consternation of his long-suffering girlfriend (Mila Kunis).

Feel free to shake your head all you want: You can’t overestimate how funny it is to watch a stuffed bear behave boorishly, go on coke binges and engage in the greatest man-versus-plush-toy fistfight ever committed to celluloid—or how impressive it is that MacFarlane actually milks the movie’s high-concept premise for emotional resonance. But while the adherence to Family Guy’s obsessive-compulsive offensiveness and tangential gags will delight the show’s fans, everyone else will find the gratuitously incessant riffing grafted onto an Apatovian narrative to be a mismatched coupling. Was the absurdist idea of a talking, boozing, blonde-humping Teddy Ruxpin considered not enough grist for the hilarity mill on its own?

Ted ends up undermining both halves of its whole, as well as its creator's clear intent to add something a little deeper to his crassness. You can leave childish things behind, the movie tells us, without having to give up the friendships forged during those years. MacFarlane may need to jettison his adolescent belief that cramming every moment with two winks and a zinger exponentially ups the gutbusting, however, before he can hit his real artistic stride.