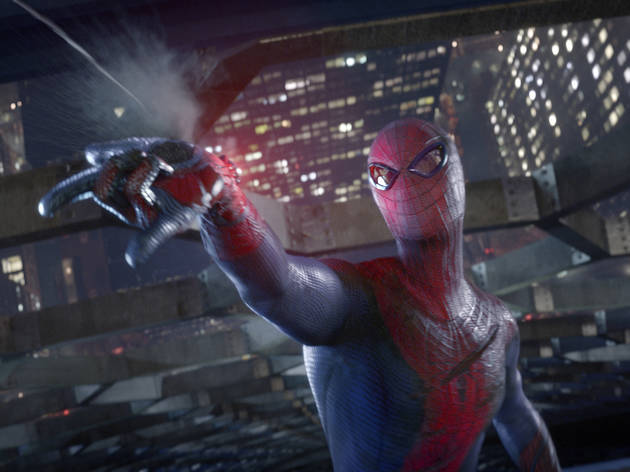 It’s web 2.0. Five years since Sam Raimi hung up his ‘I Love NY’ cap and Tobey Maguire ditched the Spandex, it’s the turn of director Marc Webb (‘500 Days of Summer’) and British actor Andrew Garfield (‘The Social Network’) to turn back the Spidey-clock and start again. Memories are short in Hollywood, and generations are measured in dog years.

This version of the Marvel Comics staple is an origin tale (dead dad, classroom bullying, spider-bite) which is low on psychological trauma and high on regular teen woes. Again we learn how Peter Parker (Garfield) lost his parents and gained a mask. But the evolution into a swinging, slinging city vigilante is framed squarely by recognisable adolescent awkwardness and romantic troubles involving his schoolmate and new girlfriend, Gwen Stacy (Emma Stone), daughter of  the city’s chief of police (Denis Leary). Garfield is more robust and charming than Maguire, and he forms a pleasing Brit-acting axis with Rhys Ifans, who plays his adversary Dr Curt Connors, later The Lizard.

Webb and the film’s writers have done a smart job of making a snappy blockbuster with few pretensions: ‘The Amazing Spider-Man’ is light on its feet and feels both intimate and expansive, smoothly making the transition from hanging out in school corridors to hanging off the sides of buildings. Webb offers no radical rethink about how to craft a comic-book summer movie, but he delivers a enjoyable rush over a patchwork of genres – romance, action, sci-fi, horror and comedy (there’s almost one for every leg of a spider) – while avoiding bumps at the joins. The action sequences are gripping and have a bouncy, parkour-style giddiness to them.

Garfield gets the best lines and is a comic, often slapstick, presence for much of the movie as he learns how to cope with his new powers. There’s a great scene on the subway as he bumps into fellow commuters (only a Brit could deliver the ‘I’m so sorry’ line). Webb gives the Spider-Man story a distinctly light touch: even when Spider-Man and The Lizard are smashing their way through a school, he allows us momentarily to view the scene from the perspective of an elderly librarian with headphones on. We’re never far from romance or laughs, and at times ‘The Amazing Spider-Man’ feels like a romcom upgraded to include 3D and industrial-strength cobwebs.

Spidey is the ultimate New York superhero, and this is full of nods to the city’s movie heritage. There’s a touch of Woody Allen to some of Garfield’s twitchy scenes, while ‘King Kong’ looms over Spidey’s skyscraper-top encounter with The Lizard. There’s even a scene where Parker mopes down the street with his shoulders hanging low like DeNiro in ‘Taxi Driver’. This lone gun with a red sock over his head also feels an urge to clean up the streets – but his New York is mostly benign, a place where crane drivers and cops wave him on his way and the skyline sparkles in approval. Soft, yes, but also satisfying.