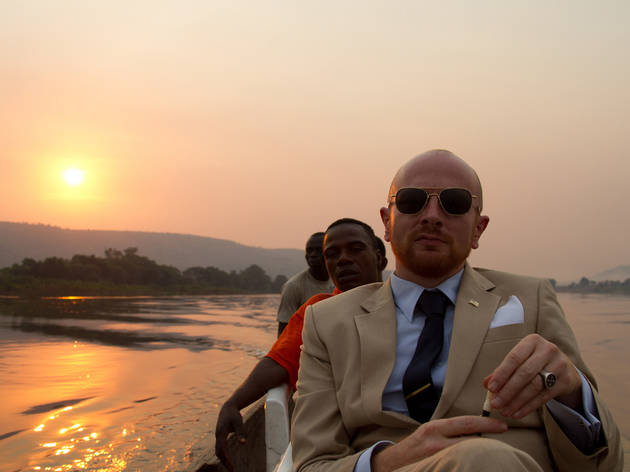 “If the Congo is the heart of darkness,” declares filmmaker Mads Brügger, “then the Central African Republic is the appendix.” And it is to this metaphorical outgrowth that the Danish documentarian first heads, determined to detail the corruption that has spread throughout the dark continent like a disease. For a price, it seems, anyone with the right connections and massive cojones can buy into a diplomatic position that will allow a person to conduct business in Africa with impunity and immunity—specifically, to engage in illegal transactions with the region’s blood-diamond mines. So Brügger adopts a new identity as an “ambassador-at-large,” concocts a scheme to build a match factory that employs Pygmies, and begins negotiating the netherworld of fixers, mercenaries, government attachés, dodgy expat Euros and other freelance opportunists that facilitate such black-market bureaucracy.

As any Daily Show addict will tell you, there’s a thrill in seeing the powerful get punked, and such schadenfreude moments fuel The Ambassador’s gonzo piss-take on postcolonialist rot. (There’s a delicious irony in watching the CAR’s shit-talking head of state security and surveillance being surreptitiously taped on a spy cam.) But whereas the director’s previous big-screen infiltration act, 2009’s The Red Chapel, found humor and pathos in its first-person political exposé, there’s precious little of either commodity in Brügger’s slog through a moral gray zone. Within the first ten minutes, the movie proves the point that exploitation in Africa is rampant, but never goes any deeper than that; it’s an undercover endeavor that never feels as if much is actually being uncovered. Even when Brügger’s eventual participation in such dealings, in the name of journalism or otherwise, is briefly acknowledged, his guilt is dismissed with a sound bite and the equivalent of a shrug. The man set out as a muckraking Charles Marlow and came close to becoming another Kurtz—but why explore that murky realm when you can just give people Mads’s Excellent Diplomatic Adventure?