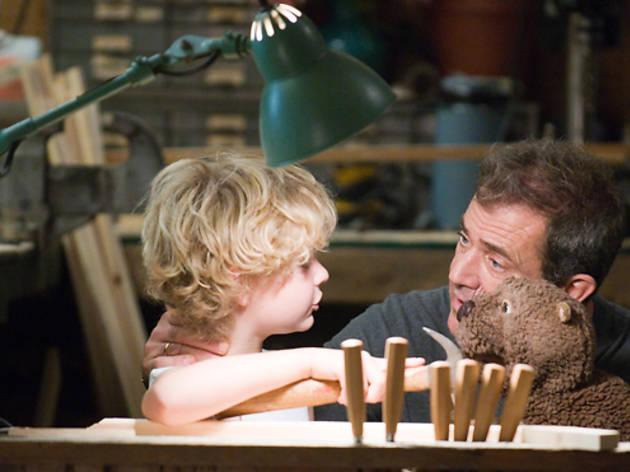 Viewers will have to check cartloads of baggage upon entering Jodie Foster's courageous, crazy-as-a-loon character study about a man having a major midlife meltdown. As if that description alone weren't a tough sell, there's also the matter of our hero embracing his higher power---specifically, a beaver hand puppet with a Cockney accent and a messiah complex. Go ahead, try to stifle those uncomfortable giggles and that  feeling of utter are-you-kidding disbelief. Did we mention that this depressed everyman is played by a movie star with, shall we say, a public-relations issue or three?

Do what you can to overcome these obstacles, and momentarily forget (you don't have to forgive) the bilious specifics of Mel Gibson's offscreen transgressions; what you'll get in return is one of the single most bizarre, and bizarrely moving, meta-tales of bouncing back from rock bottom ever. Even the long tabloid shadow cast over this production can't keep The Beaver from finding an emotional resonance in a ridiculously absurdist spectacle, making you sympathize with someone confronting his failure as a father, husband and human being via a ratty felt toy that sounds like Ray Winstone. This puppet allows its owner license to ask for forgiveness, though thankfully, the film role doesn't fulfill that same function; an explicit sense of celeb-exorcism remains blissfully absent. Instead, Gibson simply turns his signature righteous rage into a crushing inward sorrow---Sad Max?---and Foster boldly plays everything straight, rendering her actor's unnerving turn to mania (and a pitch-black third act) with zero tongue-in-cheek.

It's such a ballsy, unironic and admirably naked leap into the void that you wish the subplot involving Gibson's son (Yelchin) and a cheerleader (Winter's Bone's Lawrence) working through their own traumas didn't diffuse the pathos with predictable turns and saccharine epiphanies. Both talented performers invest as fully as they can, as does Foster, and you can see how their story line is supposed to counterbalance the darkness with something lighter, more hopeful. Compared with Gibson's free-fall psychotic episodes, however, it's pure After-School Special material, a detrimental distraction to a genuine car-wreck drama literally at hand.