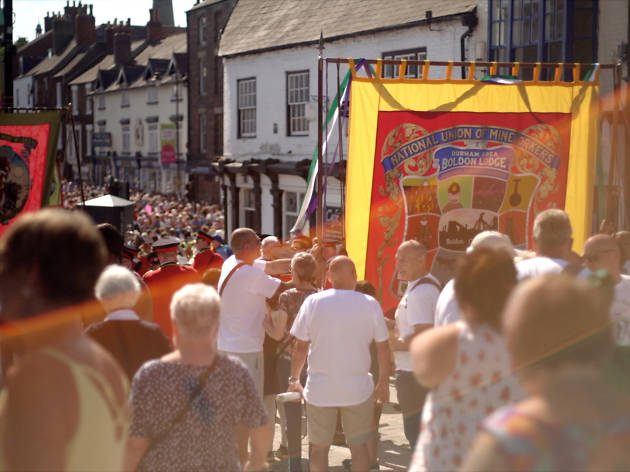 This documentary about the Durham Miners’ Gala is a fascinating insight into a culture still defined by coal mining.

Since 1871 the Durham Miners’ Gala has been a cultural fixture in the North East. Part parade, part political rally and wholly working-class, ‘The Big Meeting’ is a celebration and preservation of a community created and then almost destroyed by the coal industry.

Daniel Draper’s thoughtful documentary follows the preparations and the day of the 2018 gala. There are brass band members and banner makers. There is super-articulate teenager Charlotte Austin running a socialist bookstall, and the rather more awkward Jeremy Corbyn.

Above all, this is a portrait of people whose lives are defined by mining. Although the pits are long-closed, what they stood for lives on. That probably makes it sound a bit worthy if you’re not big into social history, but actually this is a timely reminder that the working class in this country have always had to watch their backs. While the political resonance of the miners’ strike in the ‘80s has been milked for conceptual art and TV drama, it was the systematic destruction of a people historically seen as too big for their boots.

Draper’s scrapbook approach includes archive footage of hand mining, a stark illustration of how deadly this industry was. For these communities, it was a source of pride. For industrialists and Tories it was uppitiness (‘Still hate Thatcher’ reads one parader’s lapel badge). This conflict lends ‘The Big Meeting’ its poignancy: the gala is a power showing of a people for whom self-respect had to be a suit of armour, as their influence was taken away.

It’s too long, and ‘The Big Meeting’ has its gauche moments (a timeline of Labour leaders seems simple-minded given the party’s current issues). But in a world where ideas like ‘pride’ and ‘community’ are used to sell hybrid cars, it has something to say.

Director:
Daniel Draper
You may also like
Popular movies
We know this city. Do you?