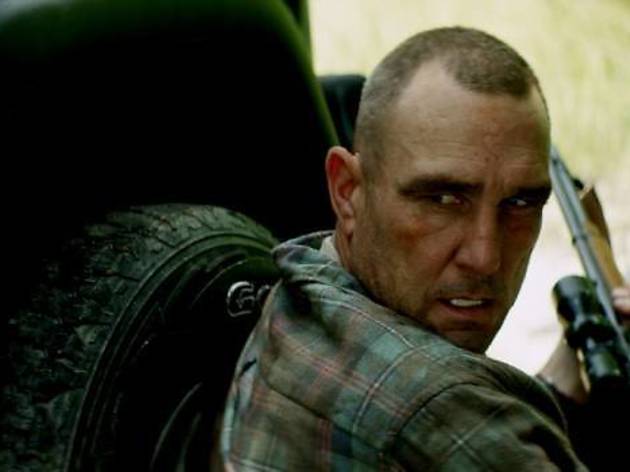 Despite an on-form Malcolm McDowell, this creaky gangster thriller is critically short of propulsion

Bish-bosh La’hn gangsters meet dodgy American oilmen in a clunky crime thriller that reminds you of that old adage about Britain and America being two countries separated by a common fackin’ language. On one side, there’s Malcolm McDowell’s teetotal cockney crime lord; on the other, Ron Perlman’s swaggering driller. In the middle? Vinnie Jones’s perma-grimacing enforcer, Neelyn – a kind of fun-free version of Lock, Stock and Two Smoking Barrels’ Big Chris.

Neelyn provides a voiceover – delivered with the throaty growl of a man who probably gargles with barbed wire – explaining how the boss, Harris (McDowell), has brought his crew to the Appalachians to launder suitcases of dirty cash via his old mucker, oil baron Preston (Perlman). The sense the trip is a bit of a jolly is enhanced by the presence of Neelyn’s girlfriend Fiona (Lenora Crichlow) and Harris’s escort Jackie (Elyse Levesque) – at least until Preston’s sleazy, psychotic son Junior (Brandon Sklenar) inflicts himself on Fiona with violent results.

You can tell roughly where The Big Ugly is going right from those opening exchanges: people are going to get punched, booze will be slugged back, and there will be some lads’ mag philosophising about blood oaths and the bonds of brotherhood. Then more people will be punched. Amid all this, female characters will stand around wondering why they’re so one-dimensional.

It’s oh-so-familiar terrain, yet writer-director Scott Wiper lets a deadening sense of inertia creep in, leaving the payoff feeling like a Guy Ritchie movie played at the wrong speed. The preponderance of middle-aged men doesn’t help: world-weary, seasoned villains they may be, but you wouldn’t bank on any of them breaking into a sprint without pulling something.

Criminally, the dependable Bruce McGill is given almost nothing to do as Preston’s trusted henchman, while Nicholas Braun (Succession’s cousin Greg) makes a surprising and not entirely auspicious appearance as his morally conflicted foreman. On the upside, McDowell is enjoyably ripe as the Perrier-sipping Harris and Perlman barrels through his scenes with juicy menace. Jones, meanwhile, gives it his best shot as the vulnerable but no-bullshit Neelyn. Ultimately, though, he’s a blank canvas. Like the film, Jones is reaching for depths that aren’t really there.

Available to stream in the UK from Fri Jul 24.