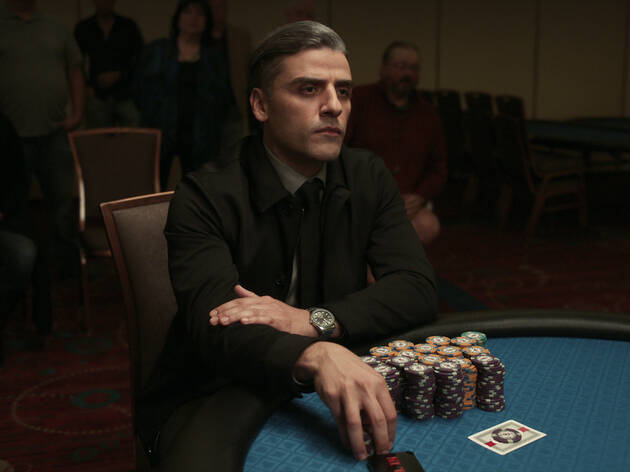 There’s a scene in Paul Schrader’s latest examination of the American male psyche, where Oscar Isaac’s eponymous antihero William Tell sits his young protégé Cirk (Tye Sheridan) in his motel room for a serious talking to. Dread envelopes the pair as the ambiguity of this card sharp’s intention could be a threat to this kid’s angry existence or a push even further down the path of revenge against a military contractor he’s so rigidly focused on. ‘Any man can tilt,’ William ominously tells Cirk. He’s describing the way both a card player and a military interrogator, roles he has expertise in, can increasingly force a hand, or person, without achieving the desired results.

It’s one of The Card Counter’s few arresting and intriguing scenes, and is symbolic of Schrader’s love for leading men ready to tilt themselves – from Taxi Driver’s Travis Bickle to First Reformed’s Ernst Toller – but for all its moody moralising The Card Counter is a slowburn bluff with little new to offer.

The writer-director wields his favourite lonely man trope to explore the traumatic hangover of America’s war on terror through the eyes of Isaac’s small-time gambler. William’s voiceover and diary entries, written with expert penmanship in motel rooms made even more nondescript by his compulsive habit of covering every bit of furniture with sheets, deliver gambling tips, tricks and context for how he learned card counting while serving eight years in military prison.

His crimes involved torturing suspects at Abu Ghraib prison and these acts play out in gory flashback detail through wide-angled fisheye lensing on naked Arab bodies and the yellow filter Hollywood loves to use when depicting anything Middle East. But Schrader is not at all interested in these victims; they are dehumanised while the story concentrates on the perceived victims of scapegoating by the American war machine.

Those scenes contrast with the mundane, dimly lit and grey existence of William’s low-profile gambling world. It soon leads to higher stakes once he teams up with Tiffany Haddish’s likeable financial backer La Linda and takes Cirk under his wing: He wants to give the kid a second chance on life and thus assuage his own guilt.

While there are some atmospheric and absorbing moments, all involving Isaac monologuing or close-ups on his face depicting stormy thoughts brewing underneath, Schrader ultimately abandons his gambling subplots in favour of a two-fold ending that is both anticlimactic and empty. The Card Counter may just live up to its name: After the return to form that was First Reformed, I certainly felt cheated.