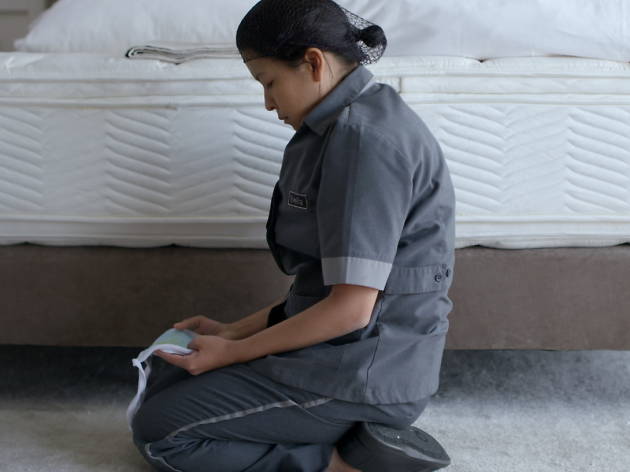 It lacks the emotional grace notes of ‘Roma’ but this sturdy character study of a Mexican chambermaid is satisfyingly detailed.

In a towering luxury hotel overlooking – but infinitely remote from – Mexico City, 24-year-old Eve (Gabriela Cartol) is a chambermaid. She is hard-working. She talks to her young son on the phone, but often cannot get home to him. Her fellow workers tease her for her shyness but mainly ignore her. She’s a service device, like a trouser press or a mini kettle. Her one ambition is to be in charge of floor 42.

Lila Avilés’s portrait of one working-class woman’s life is richly detailed but ultimately a bit frustrating. The focus remains remorselessly close on Eve at all times. She scrubs toilets and changes beds. Other than a confused old man on the floor under a duvet, we barely see the guests. There’s a media-type arsehole constantly demanding more bog roll and a self-involved Argentinian who parades around naked and uses Eve as a babysitter while praising her good teeth (‘Must be all the corn and aloe vera’). The hotel itself is an unfocused backdrop to the psychodrama. Clumsy lapses in tone – like a scene where Eve masturbates in a hotel room for a window cleaner dangling outside, or a symbolic red dress in lost property that she craves – feel like self-contained short stories that don’t properly marry up with the rest. The most promising character, grotesque fellow chambermaid Minitoy, remains largely unexplored.

Cartol is fantastic as Eve, though, conveying determination, resignation and the sense of a romantic, hopeful inner world that she must try and shield from inevitable disappointment. But in focusing so closely on her, Avilés relies on Eve to do everything: she’s a skivvy both in and for the movie. Still, you’ll never leave a hotel room in a state again. Not that you would, obviously.