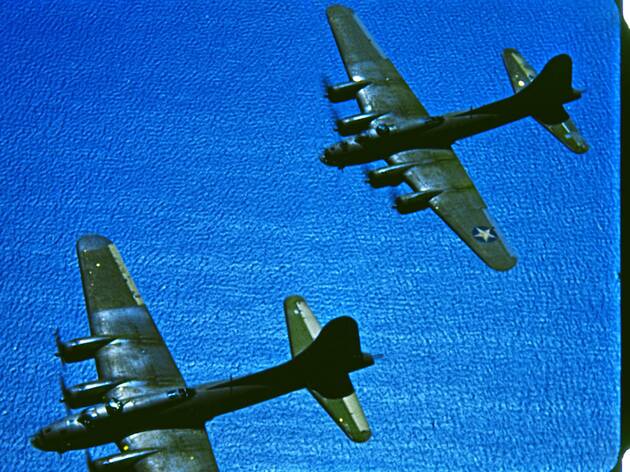 Like ‘They Shall Not Grow Old’ with wings, this 4K restoration of William Wyler’s ‘Memphis Belle’ brings the courage of US bomber crews home afresh.

‘Those were not good days,’ reflects former US airman John Doyle with some understatement in this World War II documentary. Using footage of the 8th Air Force’s bombing campaign from England against targets in Nazi Germany, it doesn’t just recount the ways death visited itself on men like Doyle in 1943, it shows them. Black pillows of flak burst seemingly harmlessly in azure skies, German fighters tear through the clouds like angry gnats, smoldering wreckage shows the fatal result of a dodgy take-off with a full bombload.

The significance of the footage is that it was originally captured by Hollywood great William Wyler, the man behind ‘Roman Holiday’, and his courageous film crew. They flew on actual missions to capture the terrifying business of war in the skies for a documentary called ‘Memphis Belle’ – and it shows. The once-scratchy 16mm cinematography, restored in 4K and pieced back together by director Erik Nelson, is often stunning. Oceans of blue and widescreen formations of B-17 Flying Fortresses suddenly give way to up-close-and-personal shots of the men joking away mortal danger and shooting the (minus 40 degree) breeze. Bravado, fear and the simple business of getting there and back again in one piece all mingle in the frame.

Wyler, who went on to make the compassionate ‘The Best Years of Our Lives’ about servicemen returning home after the war, clearly cared enormously for these men, though interestingly, it’s not always reciprocated. One lingering camera shot is met with an angry glance from an airman fresh from a harrowing mission. Brave faces were put on the camera and there’s the undeniable air of propaganda to what was, after all, originally a propaganda film, but Nelson’s film has real power in those unguarded moments. And it doesn’t shy away from showing the consequences of the bombing on Germany’s shattered cities.

If it doesn’t have quite the ‘wow’ factor of Peter Jackson’s World War I restoration ‘They Shall Not Grow Old’, that’s mainly because it’s sharpening up colour images rather than colourising black-and-white ones. Still, it’s an impressive technical feat. Because the footage was recorded without sound, the audio track had to be painstakingly recreated using an actual B-17 (it’s always hard to argue with a film whose foley department has a bomber). The pacing lags a little at times, but ‘The Cold Blue’ gives a real sense of what it was like to be strapped into one of these jolting, juddering, bomb-filled crates. They were called the greatest generation for a reason.

Director:
Erik Nelson
You may also like
Popular movies
We know this city. Do you?