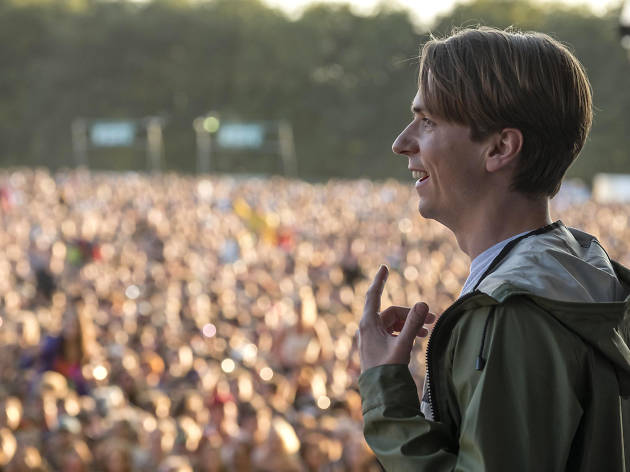 It’s a coming-of-age comedy directed by Iain Morris, one of ‘The Inbetweeners’ team, set at a squelchy, Glastonbury-like festival.

You could be forgiven for spending the first twenty minutes of ‘The Festival’ wondering if you’re watching an Inbetweeners spin-off. Iain Morris, who co-created that show, directs Joe Thomas, who played Simon, as Nick, a recent university graduate who is middle-aged before his time. Nick finds normal teenage human interaction incredibly uncomfortable and can turn even the most casual social situation into a bum-clenching nightmare of awkwardness. Essentially, he’s Simon with a different name.

Those similarities are far from a problem. ‘The Inbetweeners’ movies were a hoot, as is ‘The Festival’, albeit a slightly quieter one. After a humiliating break-up with his girlfriend (Hannah Tointon), Nick reluctantly goes to an unnamed festival with his friend Shane (Hammed Animashaun) in the hopes of taking his mind off things. Because Nick is a selfish arse who can ruin any fun, the weekend becomes a series of catastrophes as he makes a horrible job of trying to relax.

Morris and Thomas’ history really pays off here, with the director getting the most from his star’s skill for making a complete tool sympathetic. Nick is objectively horrible, but Thomas roots his awfulness in sadness, so you’re (just barely) on his side. He’s surrounded by highly loveable, lesser-known comic actors, notably Animashaun, announcing himself as a major screen talent, and Australian comedian Claudia O’Doherty as a festival loner who is as upbeat as Nick is down.

Some of its comic set-pieces feel like they needed one more script polish to fully wring out all the gag potential, but this is a consistently funny comedy that blends surrealism, a few gross-out moments and very British farce. Like a good festival, it mixes a little bit of everything together and if you go with it you’ll have an absolute blast.