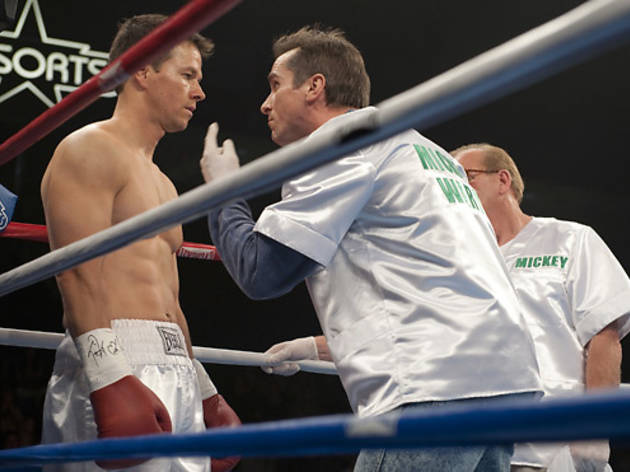 What do we talk about when we talk about Oscar bait? We may fixate on accuracy in based-on-a-true-story showcases, be wowed over the physical transformations of actors, and measure the pandering and positioning of films with these characteristics as contenders. This is what dominates the conversation when half-hearted, well-intentioned awards hopefuls start bolting out of the gate en masse like juiced-up greyhounds. It's rarely "Why are these films good enough to be considered 'the best?'" (take that term with a grain of salt the size of 127 Hours's boulder), but rather, "Just how far will they go for a little bald guy?'"

It may be unfair to crucify David O. Russell's The Fighter for every seasonal sin committed by its peers who also vie for gold and glory. But the Oscar question is, tellingly, almost the only thought that reels through your noggin as you sit through this labor of love for producer-star Mark Wahlberg, who toiled for years to get the story of boxer "Irish" Micky Ward up on the big screen. It starts to eclipse more pertinent notions, like whether the movie actually reveals anything about the world this Palookaville poster boy turned Junior Welterweight champion was slugging his way through. Or whether his half brother, Dicky (Bale)---who went from promising amateur pugilist to professional crackhead and familial millstone around Micky's neck---is the film's social conscience or just one half of a clunky Cain-and-Abel tale. Or, for that matter, whether the sweet science offers salvation for working-class stiffs with quick fists, the very essence of post-Rocky boxing movies. There are really two desperate wanna-be prizewinners here---and one of them is the film itself.

You can't necessarily blame Wahlberg, as his modest performance is the one element that feels truly authentic and heartfelt. The role plays to his strengths: a rough-and-tumble earthiness, the ability to suggest a dreamer lurking beneath the exterior of a bruiser. Yet he also demonstrates a knack for using quietude to great effect, and many of The Fighter's strongest moments are ones in which Wahlberg communicates Micky's beaten-down worldview with stillness and a glance. Watch him timidly express his hopes to his tough-talking girlfriend (Adams, also excellent) or recede into the background while "Da Pride of Lowell" Dicky milks yesterday's glories ("I took on Sugah Ray!"). Wahlberg's underplaying draws you in almost as much as the extraordinary physicality he displays once the gloves are on; when his dukes go up, you feel like you're watching a boxer acting as opposed to an actor boxing.

With Bale, however, there's never any doubt that you're watching a performer in full check-me-out grandstanding mode. Having dropped 30 pounds to play the drug-addicted Dicky, this lean, mean scenery-chewing machine rarely stops moving or mugging, but there's far too much Method to his madness. While the requisite postscript featuring Bale's real-life counterpart proves that he nailed Dicky's emaciated physique and live-wire charm, you still end up with calculated verisimilitude as an end instead of a means. You don't see a character; you see gears churning, strings being pulled. This is the sort of overly virtuosic shtick that Bale now gravitates toward, in which bravura intensity allegedly trumps substance, subtlety and actual acting. Guess what: It doesn't.

Yet the knockout letdown here is really Russell, a filmmaker who's never been afraid to take chances or go off the beaten path. There was a hope that his iconoclastic sensibility would add something unique to what's basically a typical root-for-the-underdog narrative. What we get instead is a Bahstun-accented pantomime-horse show with the most literal soundtrack ever ("Voices Carry" for a gossip scene; "Back in the Saddle" for a victory montage). There's no anthropology in his caricatured regionalism---it's all hairdos and fuck yous---and apart from shooting the fight scenes in a grainy digital style with slo-mo flourishes, it's impossible to distinguish Micky's bouts from any other ringside screen fisticuffs. This movie needed the fire-in-the-belly visionary who made Three Kings to complement Wahlberg's passionate yet grounded performance, and it got someone who seems too timid to buck a formulaic system. The Fighter may know how to hit hard on sentimental pressure points and go easy on the complexities, a strategy that's been known to fell Oscar voters in one round. But those who expect more than that will be left wondering how a pet project loaded with talent ended up becoming a play-it-safe prestige picture more preoccupied with peacocking for statuettes than realizing its potential.