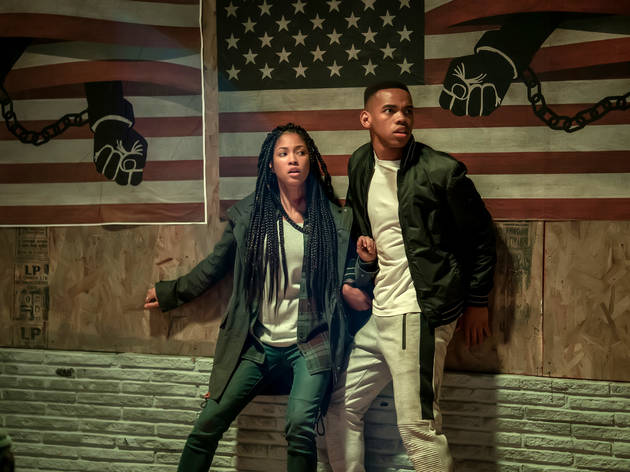 The vigilante franchise finds some new life amidst all the killing.

Part horror yarn, part political parable, the ‘Purge’ franchise is a fascinating one, each film serving up grisly episodes from the conceit (12 government-sanctioned hours of legal crime). It began as a take on class, then took on race, and increasingly each time, politicians – this prequel, released on July 4, with a Trump-baiting promotional campaign and overt references to real-world events within – one handsy psycho goblin is screamed at for being a ‘pussy-grabbing motherfucker’ – is, as is already clear, not subtle. But subtlety is not a friend of these films.

The timeline is bewildering but prescient. The first film, released in 2013, was set a few years in the future, informing us that the first purge took place in 2018. And now we have that first purge, indeed in 2018, reflecting current happenings more keenly than ever. Staten Island plays host to this inaugural, experimental event, in which residents are financially incentivised to stick around for the night, and paid yet more to actively participate (ie kill people). The idea, the public is told, is mass soul-cleansing. A social catharsis. Nobody quite buys it, least of all the ruling party the NFAA, who announce that ‘the American dream is dead’, promising a rebirth. There is, of course, more sadistic stuff at play.

This film realises the conceit more wholly than its predecessors, and for an hour or so feels properly nightmarish as we ride along with purgers and protectors, notions of good and bad, right and wrong blurred and distorted. James DeMonaco, who has written all four films and directed the first three, leaves the latter job here to Gerard McMurray, an African-American bringing his own vision to a film which has an almost entirely black and Latino cast. It also feels a little less pulpy than the last two, with some more inventive visual moves than the franchise has been used to. And there’s charisma on the streets, most notably from Y’lan Noel who, as drug lord and anti-hero-in-waiting Dmitri, is pure movie star.

As ever though, it’s a muddle. The dialogue is spirited but scrappy, with broad strokes leading to unintentional comedy. ‘The Pope has condemned the Purge,’ we are told at the start. No shit. Why these purgers would be so immediately inventive, these ‘Nightmare Before Christmas’-alikes with their fabulous masks and deathly assault courses, is a little baffling, and it’s just not as scary as the idea of pure, personal-driven purging, as we’ve seen in earlier instalments. Much of it is nonsense; Marisa Tomei’s psychologist is especially idiotic. And this film may well be the nastiest of the lot – there is a lot of death here. A lot of death. Still, it is a righteously depressing metaphorical mirror, a film that has no faith in those pulling the strings.