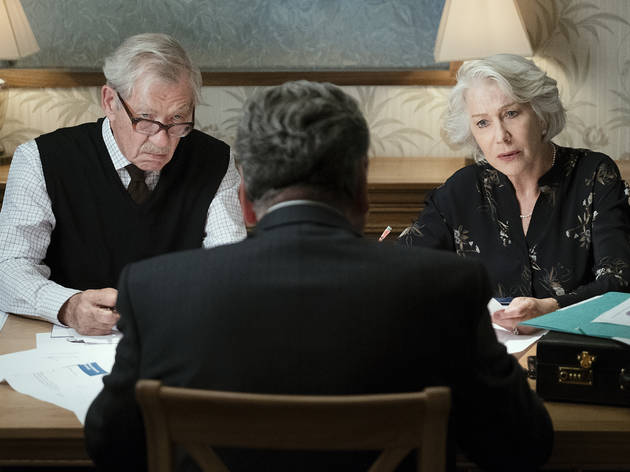 This fun but improbable con-man thriller gets by on the acting power of Helen Mirren and Ian McKellen.

A good twist ending should feel like a jigsaw puzzle deftly assembled from pieces that have been in front of you all along. The ending of ‘The Good Liar’ takes a different approach: namely, lobbing fistfuls of random pieces at you then beating you over the head with the box. It stands alone as the silliest twist of the year – a year that, lest we forget, has also featured a film in which Matthew McConaughey turned out to be a video-game character and ‘Last Christmas’.

The big reveal of this con-man potboiler may be weapons-grade tosh, but you shouldn’t let it detract too much from the enjoyable ride to that point. Its stars – Helen Mirren and Ian McKellen – certainly don’t. McKellen is on joyously hammy form as confidence trickster and proper wrong ’un Roy Courtnay; Mirren is gauchely naive as Betty, his wealthy mark. Both are clearly having a blast and the screen crackles when they share it.

We meet this pair of out-of-touch old-timers on a ‘computer service’ date. Dressed like he’s attending a fixture at a golf club bar and boasting a certain level of unctuous charm, Courtnay has a line in fleecing the unsuspecting. Mirren’s ingenuous widow is sweetly trusting. Charmingly, they’re both a bit nervous (though at least one of them is putting it on). They’re soon bonding over their grown-up kids and, hilariously, a cinema trip to see ‘Inglourious Basterds’. He has a strange dislike of kitchens that hints at a shadowy backstory. Probably involving kitchens.

Behind the scenes, Courtnay has a sidekick to help him with his byzantine schemes (Jim Carter, a lot less morally upright than in ‘Downton Abbey’). He’s also surprisingly swift to violence, which adds a nice edge. Betty’s beady-eyed grandson (Russell Tovey) triangulates the cat-and-mouse manoeuvering, and it’s fun watching McKellen’s trickster breathlessly having to recalculate on the hoof.

Director Bill Condon (‘Gods and Monsters’) can do this stuff with his eyes closed, and sometimes it feels like he might be doing that as the plot chugs from London to Berlin and secrets are duly uncovered. But there’s enough visual flair to elevate things above standard genre fare. A god’s-eye view of Betty’s suburb resembles a nocturnal labyrinth lit up by the searching headlights of Roy’s car. It’s a neat metaphor for a mazy thriller that only gets lost at the very end.