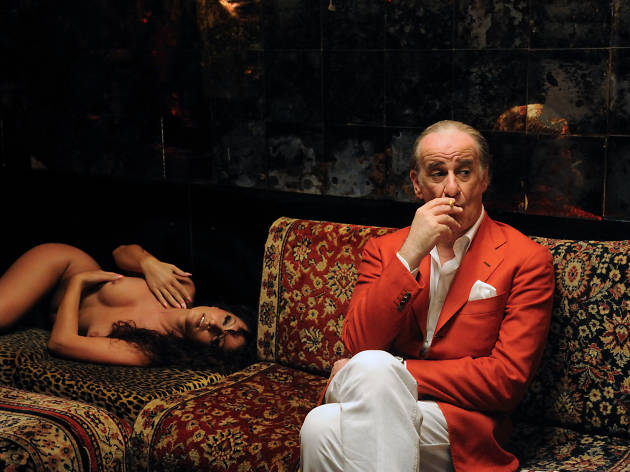 Life is a performance and Rome is the stage in ‘The Great Beauty’ from Paolo Sorrentino, the Italian director of ‘The Consequences of Love’ and ‘Il Divo’. In Sorrentino’s last film, the English-language ‘This Must Be the Place’, Sean Penn usurped Toni Servillo as the actor at the heart of Sorrentino’s strongly visual, energetic and heavily musical studies of strange, flawed men. But now Servillo is back, playing a dapper, cultured and dilettantish Roman writer Jep Gambardella, always dressed in a fine suit and finer shoes. As the film opens, he celebrates his sixty-fifth birthday with a hedonistic party in his flash apartment which overlooks the Coliseum on one side and a convent on the other. In his world, the high life meets the low life, writers and thinkers mingle with strippers and models.

Sorrentino is a filmmaker who, whenever he can, kicks words into touch in favour of an ever-moving camera, endless locations, room after room after room and characters, events and situations that are way larger than life. His cinema is big. His eye is all-seeing. He prefers snapshots and isolated episodes to straightforward tales. In his stories, the far-too-beautiful rub up against the overly grotesque. Quick wit and clever conversation are never far away.

Sorrentino is so often compared to Federico Fellini that it feels right that he has made the city of ‘La Dolce Vita’ the focus for this heady, beautiful, entrancing film. After Jep, Rome, or at least a very particular vision of it, is the other main character. It’s presented as a glorious, overwhelming place whose great architecture and even greater art only makes the idle chatter of men and women, even intellectuals like Jep, sound like the distracting shrill of nothingness.

Jep has reached a point in his life when he’s beginning to mourn lost love and missed opportunities. A visit from the widower of a teenage love distracts him from his social whirl of soirées, garden parties and dinners. It prompts flashbacks to a romance in his youth. Jep starts to wonder what he’s achieved and where it’s all heading. He wrote a novel as a young man. Could he do it again? Is he shallow, and maybe a failure? ‘You’ve changed,’ says his newspaper editor (a dwarf, naturally; this is a Sorrentino film), for whom he mainly interviews artists. ‘You’re always thinking,’ she adds.

A way of life is reaching its natural end. One of Jep’s oldest friends is leaving town. Mortality is rearing its head. Maybe that’s why we see nuns at every turn and why one of the film’s later episodes features a powerful cardinal (who only talks about cooking) and a wizened, 104-year-old Mother Theresa-like ‘saint’ (silent, mostly, and looking like a wax model) who goes to sleep on the floor of Jep’s bedroom – more usually the resting place of an entirely different kind of woman.

For much of ‘The Great Beauty’, it feels like the film may only ever be a thrilling dip into a strange, rarefied world – a world where botox is on sale at high-class clubs and a mysterious man with a briefcase full of keys gives the privileged access to Rome’s galleries in the dead of the night. But when the party slows down and the music begins to fade, ‘The Great Beauty’ creeps up on us, just as life is creeping up on Jep. It’s an exploration of all things surface, yes, but it has soul too, and just as the supremely controlled and refined Jep surprises himself by crying at a funeral, so the final power of ‘The Great Beauty’ surprises us too.