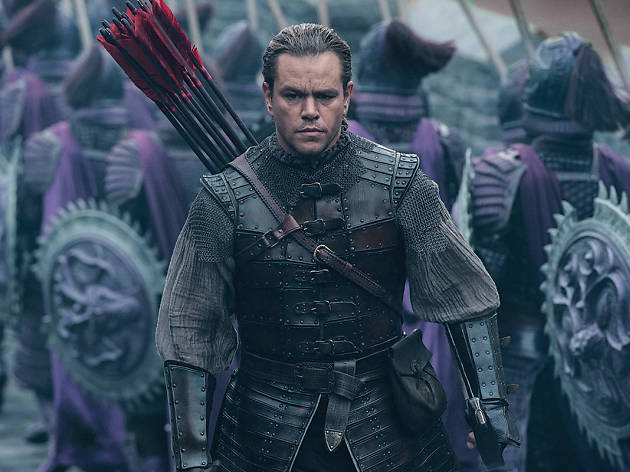 If the future of Hollywood lies to the East, we should all get very comfortable with crowd-pleasing, cross-cultural action blockbusters like ‘The Great Wall’. Guaranteed neither to offend nor confuse audiences from Beijing to Boston, this is as much a trade deal as a creative endeavour. But in the hands of once-great director Zhang Yimou (‘Raise the Red Lantern’, ‘House of Flying Daggers’), it does at least manage to be entertaining, and occasionally even thrilling.

There was a fuss when it was announced that Matt Damon would play the lead – would the film perpetuate crude, ‘Blood Diamond’-style myths of the great white saviour? Such fears prove unfounded: at best he’s a co-saviour, his grizzled mercenary William working alongside Commander Lin (Jing Tian) and her army of noble Chinese warriors to repel an attack against the titular barricade by a race of marauding reptiles. And let’s face it, Damon's casting makes sound financial sense – the man’s a global star.

But that kind of logic is sorely lacking in the movie itself. Rarely has the question, ’But why didn’t they just do that before?’ been so pertinent quite so often. The special effects aren’t always great, either, the opening CG helicopter shot through the wall recalling those old brick-maze screensavers you used to get on Windows. The touchstone is clearly meant to be ‘Game of Thrones’: big wall, evil creatures, ancient order, unlikely hero. But with its half-baked mythology and clunky dialogue, ‘The Great Wall’ has more in common with classic 1980s fantasy. It’s basically ‘Krull’ with a budget.

But that’s not necessarily a bad thing. Keep your expectations moderate, and there’s plenty to enjoy. Zhang’s camerawork is kinetic, throwing us into the heart of the action, and the martial arts choreography is spectacular. There are some fun ideas, too: bungee-diving spear warriors who dive from the top of the wall; a climactic battle in a stained-glass tower, drenching the screen with colour. And Damon is good value, his avuncular charm adding intimacy to what could have been an empty spectacle. ‘The Great Wall’ is not exactly a good movie – but it’s a pretty enjoyable one.