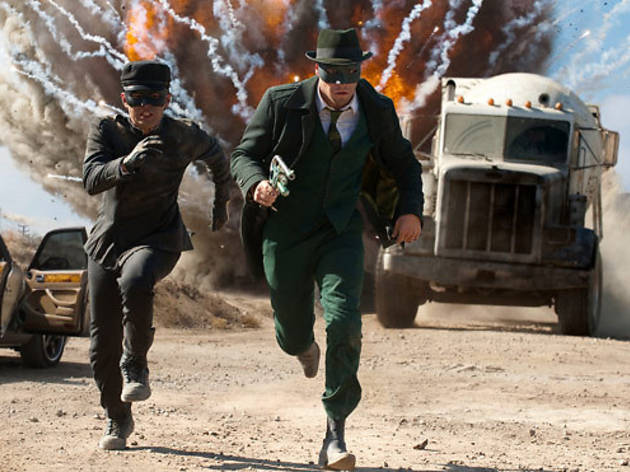 Christoph Waltz walks into a room. But now he's Russian crime lord Chudnofsky, having traded Colonel Hans Landa's mine's-bigger-than-yours calabash pipe for a double-barreled pistol, which he uses to knock a smug gangster (smarmmeister James Franco in a "clever" cameo) down a few pegs. This comes after several minutes of abrasive, faux-improvised comedy---mainly having to do with the Chudster's outdated fashion sense---that tests our patience to the hair-ripping limit even as we're captivated by the unapologetic unpleasantness on display. Then a slo-mo explosion occurs that only deepens the befuddlement, mixing jaw-dropping horror (innocent bystanders casually engulfed by flames) with the headache-inducing horrible (atrocious post-processed 3-D effects). WTF are we watching here, exactly?

Turns out that WTF is The Green Hornet's default mode, and at the very least the film's unpredictable changes in tone always keep us on edge. After this bizarre opening, we meet hedonistic rich boy Britt Reid (Rogen), whose "dick" father (Tom Wilkinson) dies from a bee-sting allergy and wills him the family newspaper---the perfect cover for his nighttime gig as the titular, often comically inept superhero. At his side is Kato (Chou), kick-ass martial-artist and electronics genius, who bromantically banters with Britt in between massively destructive crime-fighting bouts. The duo are self-aware Apatow archetypes given indulgent free reign: In the best scene, they tear through Britt's mansion, knocking each other senseless with drunk-frat lan (someone was watching They Live).

The supporting cast is ill-used: As the boys' secretarial crush, Cameron Diaz flashes her 1,000-watt grin and little else (she's like a paycheck-cashing mannequin). Waltz seems increasingly bored, especially after his character dons crimson leather suits and lamely changes his name to Bloodnofsky. And where is director Michel Gondry in all this? Hamstrung, sad to say, save for one or two inspired visual touches (a masterful split-screen sequence recalls his palindromic "Sugar Water" video for Cibo Matto). Injecting a devil-may-care attitude into a franchise-focused blockbuster only gets you so far. When all is said and done, this wasp's got no sting.