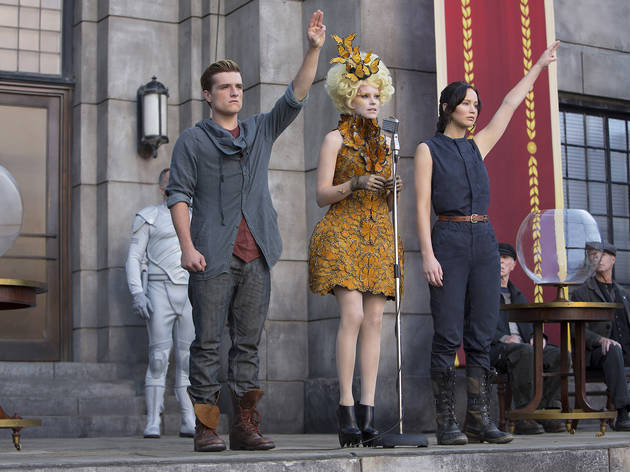 What are the odds? Like Katniss Everdeen ducking a poison-tip arrow, the keepers of Suzanne Collins’s trilogy of fantasy novels have dodged the perils of the sloppy second franchise film. ‘The Hunger Games: Catching Fire’ is leaner, gutsier and smarter. In hand-to-hand combat, it would have the first film on the floor, trapped in a headlock, whimpering for mercy. Over two-and-a-half heart-pounding hours, it doesn’t drag for a second.

A hefty chunk of the story is similar to the last one – except this time there’s more to lose. Jennifer Lawrence returns as Katniss, whose defiance has revolution a brewin’ in the districts. President Snow (Donald Sutherland, playing evil Santa) can hear the howl of fury rising. ‘Would you like to be in a real war?’ he threatens, shark-eyes glinting. Snow puts his snakish sidekick (Philip Seymour Hoffman) on the job of devising a new version of the Games to eliminate Katniss – a champions’ championship.

J-Law burns the screen. She’s stunning, suggesting a storm raging behind her eyes and powerfully conveying Katniss’s terror of leading the revolution. She’s no Bella Swan. Instead of batting her eyelashes at love interests Gale (Liam Hemsworth) and Peeta (Josh Hutcherson, less drippy this time), she shoos them away to focus on staying alive.

The Games are more fun to watch this time around. In ‘The Hunger Games’ we got a bunch of samey-looking teenagers fighting to the death. This is the Olympics of Hunger Games, with the best of the best up against each other, like Usain Bolt with daggers in his Pumas. One past winner who ripped a male tribute’s throat out with her teeth bares her sharpened fangs. Perversely, though, it’s a less violent film, as the plot drives forward with a terrific pulse of energy. What’s thrilling (if you haven’t read the book) is that you never know which character is on Katniss’s side. Who can she trust?

Lawrence has first-rate support. Stanley Tucci gets the biggest laughs as the reality TV presenter with a spooky resemblance to Karl Lagerfeld. Even bubbleheaded ditz Effie Trinket (Elizabeth Banks) shows her heart.

‘Catching Fire’ looks and feels epic. Hands down it’s one of the most entertaining films of the year. But there’s also something here-and-now about it – it taps the zeitgeist with its them-and-us society and the feeling that when money is in the hands of so few, the odds are never in our favour. The burning question is: just how badass will Jennifer Lawrence get in the next episode?