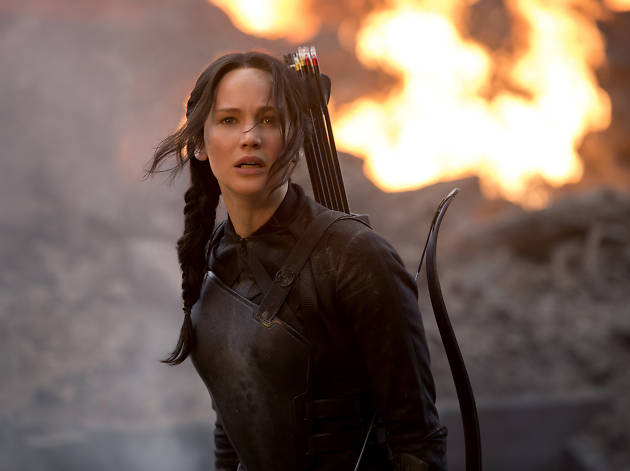 This is the film where it’s all meant to go horribly wrong for ‘The Hunger Games’. By chopping the trilogy’s final book into two, this second-to-last film should be more drag than drama – the cash-machine episode that everyone knows is just a teaser for next year’s epic send-off. And while it definitely takes its foot off the action, ‘Mockingjay – Part 1’ goes deeper and darker. Any darker they’d have to give out Prozac with the popcorn or offer counselling to traumatised 13-year-olds.

The story begins in rebellious District 13, whose commanders rescued Katniss from the Quarter Quell games at the end of the last film. Rioting has broken out in several districts and 13’s icy leader, Alma Coin (Julianne Moore with a terrifying side-parting), wants Katniss to be the poster girl of the revolution. With no fight-to-the-death games in this episode and just a handful of not-stunning set pieces, Jennifer Lawrence’s bow and arrow take a back seat to her acting. This is no bad thing: her soulful, storm-raging performance is the best thing about the series.

‘Mockingjay’ is Katniss’s coming-of-age film as she wrestles with her role in the armed struggle against the totalitarian Capitol. District 13 might be the good guys, but Katniss is suspicious of Alma Coin and her slippery spin doctor Plutarch Heavensbee, played by the mighty, late Philip Seymour Hoffman. Katniss understands the need for PR. As she heads on to the battlefield, someone asks her: ‘What if you die?’ She snaps back: ‘Make sure you get it on camera.’ As its Che Guevara, Katniss is worth as much to the rebellion – if not more – dead.

Over in the Capitol, Santa’s evil twin President Snow (Donald Sutherland) is having poor Peeta (Josh Hutcherson) tortured. (If the beatings weren’t bad enough, look at the sheeny-shiny white power suits they make him wear on TV.) For a franchise with bang-on casting, the chemistry between Katniss and Peeta has always been a bit limp, so there are no complaints here about keeping them apart. Besides, Katniss has the infinitely less lame Gale (Liam Hemsworth) to take hunting.

The politics of ‘Mockingjay’ are as intensely gripping as the games in the earlier films – and more deadly. And for a film targeting teen girls, who will be half-watching, half-texting their mates to tell them that they’re watching, ‘Mockingjay’ might just have more to say about the ethical ambiguities of war than Brad Pitt’s pseudo-thinking war drama ‘Fury’ (the book’s author Suzanne Collins is an army brat). Is the fight against the Capitol unavoidable? Can the rebels be trusted to do the right thing if they take power? And best of all, in Katniss ‘The Hunger Games’ has one of the all-time great heroines: strong, smart, stubborn, angry and full of heart.