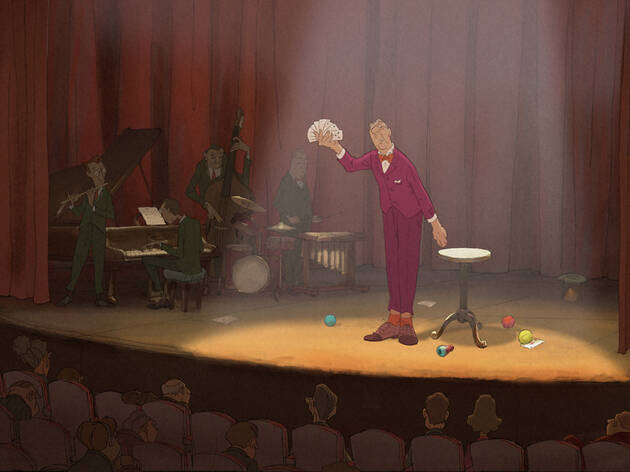 Okay, hands up who would have guessed that a warmly nostalgic, near-silent comedy about the decline of the music hall in post-war Europe would be one of the year’s most immaculately constructed, heartbreaking releases? With his remarkable new film ‘The Illusionist’, French-born artisan Sylvain Chomet (writer-director of 2003’s ‘Belleville Rendez-Vous’) joins the lofty ranks of John Lasseter, Brad Bird and Hayao Miyazaki as one of the masters of modern feature animation.

The film is adapted from an unfilmed script by the late Jacques Tati that some think was intended as a bashful apologia to Sophie, his daughter. It’s a gorgeous visual poem that explores the practicalities of following one’s dreams at the expense of parental responsibility. It gently circles a shambling stage illusionist named Tatischeff (Tati’s real surname) as he tours his creaky act from neon-lit Paris to drizzly Edinburgh with a carnivorous white rabbit in tow. While performing in a far-flung Scottish pub, a naive young lass named Alice latches on to his coat tails and stows away with him to the capital. She believes he has real magical powers.

Alice and Tatischeff’s wordless rapport is beautifully orchestrated and developed – she offers him a coy peck on the cheek as he showers her with gifts, he manfully rebuffs her affection but protects her. As Tatischeff gallantly swims against the turning tide of a fickle entertainment industry, it’s clear Alice is an emblem of his need to succeed, as a performer and a father figure. But the seductiveness of the city and the allure of modern fashions draw Alice in her own direction, towards love and independence.

As much as Tati’s gravity-defying saunter as M Hulot can’t help but provoke a wry smile, Chomet recognises that the principal skill of his muse was as a filmmaker, and more than that, as a neurotic micro-architect of screen comedy. As such, scenes are mounted in mid or long shot and ‘camera’ movement is kept to a minimum, allowing each frame to buzz with detail. Chomet recreates the streets of 1950s Edinburgh with photorealist precision, creating a veritable location-spotter’s dream for anyone familiar with the area.

Purists may moan that there is too much of a defined story for this to be a ‘genuine’ Tati article, but that’s only because Chomet puts his own eccentric stamp on it. Tati thought anything could be funny, and while Chomet runs with that idea as a director, he challenges it as a storyteller. ‘The Illusionist’ presents a cruel world in flux, a place where people grow old and drift apart and loneliness and failure lead to tragedy. The last five minutes are almost unwatchably sad, as Alice blossoms into adulthood while Tatischeff refuses to abandon his youth. The film’s parting suggestion is that a neat sleight of hand may be okay in the moment, but to excel as a parent, you need more than magic.