The Kid Who Would Be King

Film, Fantasy
3 out of 5 stars 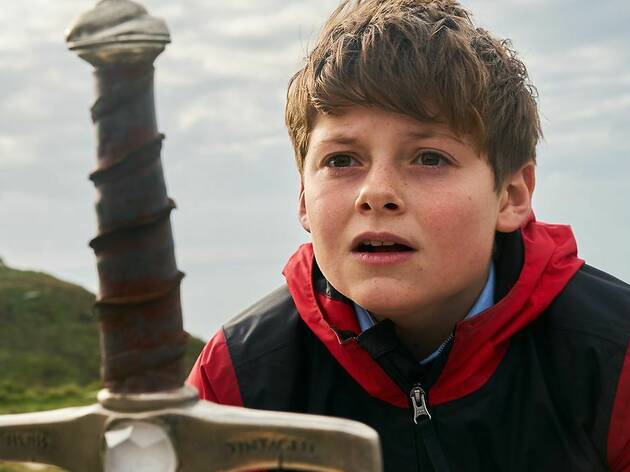 There’s something so nostalgic about writer-director Joe Cornish’s second film, lovers of ’80s movies will forgive it just about anything. This fantasy adventure is a Spielbergian spin on Arthurian legend that sticks London high school life, ancient wizards and some CG-boosted battles into a big old blender. It doesn’t quite match Cornish’s sci-fi debut ‘Attack the Block’ for sure-footedness, but it’s another neat showcase for his zinger-filled screenwriting, intuitive ear for young kids’ patter and anxieties, and the diversity of his home town.

It does more than just gesture at empowering those kids, too. Like in the Amblin movies that clearly inspired it – ‘ET the Extra-Terrestrial’ and ‘The Goonies’ – its young heroes know something the adults in their lives don’t. Here, 12-year-old Alex (Louis Ashbourne Serkis, as natural as you’d expect from the son of Andy) and his best mate Bedders (Dean Chaumoo) face the onerous responsibility of saving humanity from an army of the undead. It’s a lot to deal with, especially with the school bully on their case and Alex’s dad missing in action in equally Spielberg-like fashion. His mum (Denise Gough) does her best to encourage him, but it’s not until he stumbles upon the sword Excalibur on a building site that he finds real purpose.

This mythical McGuffin is tossed in unexplained, but before you can stop to wonder how no one else had noticed it – ‘The Construction Worker Who Would Be King’ doesn’t have the same ring to it – we’re off on a quest. In this, Alex and Bedders, a Frodo-and-Samwise pairing of resourcefulness and courage, are aided by that other Arthurian staple, Merlin. The wizard’s powers of transformation see him first incarnated as a young man (Angus Imrie), posing as the pair’s new classmate but utterly failing to master contemporary vernacular, then as his ageless self (Patrick Stewart, thesping it up royally) and occasionally, for travel purposes, as a bird.

This ancient-meets-modern set-up provides plenty of opportunities for fish-out-water gags and one of the greatest fried chicken jokes committed to screen. Cornish is most at home with these comic beats and in essaying his young heroes’ dawning realisation of what they’re up against – Rebecca Ferguson’s lank-haired she-demon Morgana – and ‘The Kid Who Would Be King’ struggles to lift its bigger action sequences and VFX-enhanced baddies much above generic. It falls short of enchanting but it’s never less than fun and likeable. Watch it through the eyes of your inner teenager and you’ll have a blast.