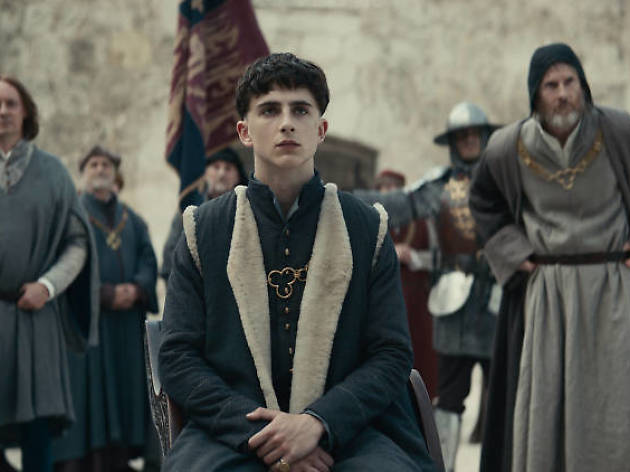 Timothée Chalamet shines as a boyish but soulful Prince Hal in this sturdily entertaining spin on ‘Henry V‘.

A meaty piece of historical drama, ‘The King’ mixes power plays, canny twists and brutal, widescreen medieval battles (prepare for much clashing metal and head severing) with a refreshing lack of deference for the Shakespeare plays on which it’s loosely based. Sure, some of the historical detail is embellished and Shakespeare purists may scream heresy, but director David Michôd (‘Animal Kingdom’) has done something genuinely fresh and confident with this well-told piece of English folklore.

Opening near the end of the bloody reign of Henry IV (Ben Mendelsohn), it finds Timothée Chalamet as the king’s dissolute but peace-loving son Prince Hal. He’s the heir to the throne but is much more interested in boozing and womanising in grimy Eastcheap with his old pal John Falstaff (Joel Edgerton) than fronting up to his hateful father. But when his younger brother is killed in battle, he has no choice but to dry out, get a haircut and assume his responsibilities.

Hal’s conversion from libertine to leader is a little thinly sketched – the haircut has to do a lot of work here – but Chalamet executes a smart gear-change, dropping the boyishness and cranking up the sense of a man troubled by his responsibilities. Also worrying him is the conflicting advice of his counsellors and the intentions of the warmongering French, embodied by a riotous Robert Pattinson as the preening, Engleesh-taunting Dauphin. The Battle of Agincourt, of course, awaits them all.

Chalamet and Edgerton do a nice job reinventing characters that will forever be associated with Laurence Olivier and Orson Welles, respectively. Egerton, in particular, is great as a war-weary, straight-talking Falstaff who’s a mile away from Shakespeare’s comic creation. Chalamet adds another string to his already impressive bow as a king who sees himself a modern, liberal-minded monarch but worries that, deep down, he’s just his dad with better cheekbones.

The dialogue is Shakespeare-ish rather than actually Shakespearian, and Michôd and Edgerton’s screenplay is careful to tack away from any obvious lifts. It’s no easy task replacing Henry V’s battlefield speech at Agincourt and that moment does fall a bit flat – Chalamet gets some guff about ‘filling the spaces between Englishmen’ ­that might have been written by Nigel Farage – but to the pair’s credit, the script isn’t satisfied with just hitting triumphalist beats. Olivier’s ‘Henry V’ was famously used as World War II propaganda. This version of the story is stirring, but it unpicks the idea of English exceptionalism with real smarts too.