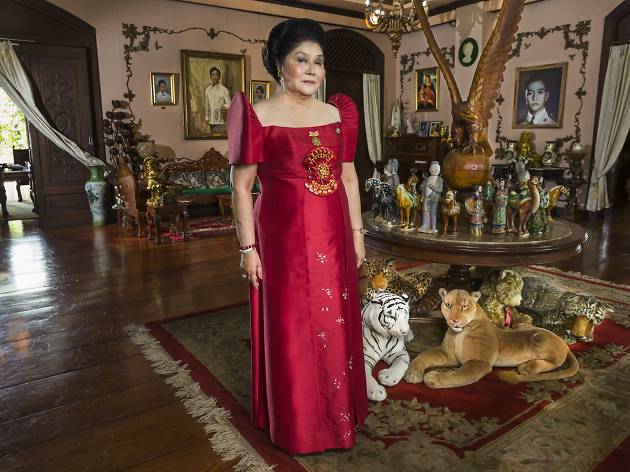 There’s a brilliant moment early in ‘The Kingmaker’, Lauren Greenfield’s enthralling doc about ex-Filipino First Lady Imelda Marcos. As a gesture towards her former power and influence, Marcos has dozens of framed photographs of herself with various world leaders laid out on tables to wow Greenfield with. Lifting one, she inadvertently knocks another. There’s a beat, then a series of loud crashes as gilded frames smash on the ground. Yet none of it registers with Marcos, even as an assistant scurries to clear up the debris. This, it’s clear, is a person well used to breaking things and not having to worry about the consequences.

Marcos blesses the film with a few of these funny-horrifying glimpses beneath her brittle, egotistical veneer. ‘The Kingmaker’ opens with her travelling around Manila serenely dishing out cash to clamouring kids in the manner of someone feeding hungry ducks. ‘When I see Manila, I feel so sad and depressed,’ she laments. It doesn’t occur to her than she and her long-dead husband, who ran the country as a kleptocracy for 21 years, might have had some role to play in these scenes of poverty. After all, they once had one of the country’s islands cleared of its inhabitants to make room for the giraffes and zebras they’d imported from Africa on a whim.

Greenfield doesn’t press Marcos on these questions, preferring to reflect her own excesses back at her. The first half of the film is a conventional, unfocused biography, dipping into her love of opulence – and, yes, that notoriously huge shoe collection – her husband’s infidelities and his battles with anti-corruption politicians Benigno and Cory Aquino, all spliced with talking-head interviews. Marcos drifts through it with the beatific air of someone who knows she’s not going to be asked too many tough questions.

But as it progresses, ‘The Kingmaker’ takes shape as an acute study of the psychology of power. Marcos slips to the back of the frame, taking the role of éminence grise to her son Bongbong, a charisma-free politician campaigning for the vice-presidency on the family name. Against the backdrop of populist leader Rodrigo Duterte’s rise to power, the filmmaker zooms in on the sense of entitlement hard-wired into this self-proclaimed dynasty, and on the way the internet has twisted and revised perceptions of its time in power. The sight of schoolkids reflecting warmly on their country’s years of martial law and repression in the ’70s and early ’80s is particularly bleak.

With documentaries like ‘The Queen of Versailles’ and the more lumpen ‘Generation Wealth’, Greenfield has been always drawn to stories of eye-watering excess, but Marcos takes it a step further: her greed is not just for money, but power and legacy too. Everything her country can offer her, in other words. ‘I was always criticised for being excessive, but that is mothering,’ she says. It’s a strange kind of mothering.