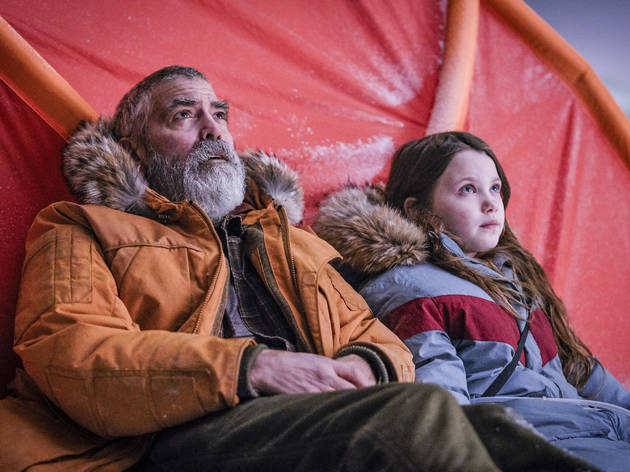 When George Clooney started making this apocalyptic sci-fi, a melancholy affair full of big, gloomy thoughts about humanity’s future, he probably didn’t expect to deliver it to a world that was several steps ahead on both counts. If you’re looking for comfort viewing, look elsewhere: The Midnight Sky isn’t interested in plugging into its director-star’s easy on-screen charisma or in offering much more than a couple of death-defying bits of action as a sop to audiences who aren’t down with all the ponderously paced thinky bits. Its sleek sci-fi visuals occasionally elevate it, although more often it’s just a bit of a slog.

While no one will ever argue that this is a Christmas movie, Clooney does play a bearded old-timer living near the North Pole – albeit a cussed, terminally ill, Scotch-chugging scientist called Augustine Lofthouse rather than actually Santa. He’s a man whose life’s work – to discover an inhabitable planet across the universe – has finally come to fruition with a space craft, Aether, speeding back to Earth with the good news. Unfortunately, it’s all too late for the human race: an unspecified but radiation-based catastrophe is inching its way across the planet and towards Augustine’s icy observatory.

The film’s big ideas – of family versus career, of paradises lost and found, and ecological anxiety – clearly drew in Clooney the filmmaker. But Clooney the actor struggles to bring spark to them, hampered by a screenplay that flings in regular flashbacks to a younger Augustine (played by Ethan Peck but distractingly voiced partly by Clooney himself). In that timeline, he’s a man who deals in formulas but who can’t come up with one to balance his ambition and his family. In present day 2049, he’s alone and has all but given up – at least, until he discovers a young girl (Caoilinn Springall, boasting scrunchy-faced charm) hiding out at the observatory and gradually rediscovers himself in their slowly blossoming relationship.

The Midnight Sky is notably lighter on its feet aboard the Aether, where the astronauts (Felicity Jones, David Oyelowo, Demián Bichir, Tiffany Boone and Kyle Chandler) are merrily oblivious to what is afoot back home. There are some nifty visual ideas - the crew interact with holograms of their own families – and a tangible sense of the pull of home that will definitely resonate. There’s even a singalong of Sweet Caroline to remind us that, yes, we will still be listening to it in 2049.

The two action scenes are exciting enough, if incidental to the wider story, but too often The Midnight Sky feels like a giant tombola of incompatible influences. Based on a novel, Good Morning, Midnight, it carries an equal debt to Silent Running in its eco-exploration of space, Nevil Shute’s On the Beach in its depiction of an inexorable, creeping apocalypse, and Aliens in the Newt-like scamp who pops up to restore Augustine’s hope. Starring in Steven Soderbergh’s adaptation of Stanisław Lem’s Solaris seems to have rubbed off on Clooney, too. The result is a hodge-podge that stirs the heart and raises the pulse only rarely.