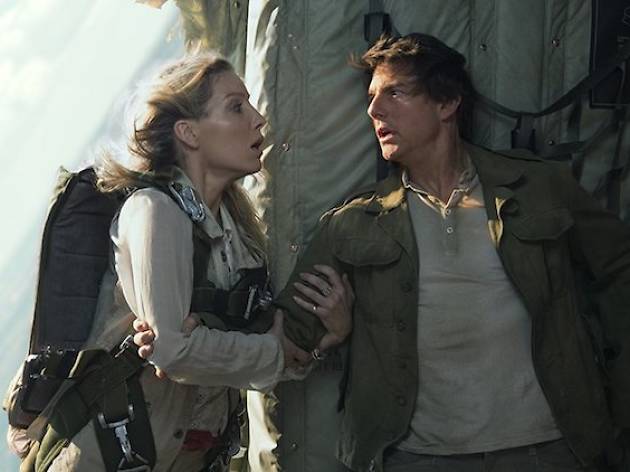 In the opening frames of this murky megabudget monster mash, the famous Universal logo – a twinkling globe – revolves and dims, revealing the words ‘DARK UNIVERSE’ in glowering block capitals. We’re not messing about, the new emblem screams. This cinematic franchise we’re building, set to incorporate Dracula, Frankenstein and the Wolf Man, will be every bit as vast and sprawling as anything Marvel or DC have to offer. It’s a big, bold fanfare of intent – after which the film itself feels like one long, wet raspberry.

If you’ve seen either the 1932 or 1999 versions of the story, you already know the basics: an arrogant Western archaeologist digs up an ancient Egyptian sarcophagus; its entombed inhabitant reanimates and runs rampant. This time our hero is Nick Morton (Tom Cruise), a wisecracking US Army loose cannon and part-time tomb raider who stumbles upon a buried mausoleum in Iraq – hang on, Iraq? Yes, in a barefaced effort to curry favour with the guns ’n’ ammo crowd, ‘The Mummy’ offers the baffling notion that the ancient Egyptians decided to bury the titular demon squarely in ISIS country, allowing Tom to look good running with a machine gun and cap a few jabbering jihadis in the process.

It’s then on to London, where the Cruiser survives a plane crash and learns that his leathery bod been chosen by the Mummy, aka Pharaonic Princess Ahmanet (Sofia Boutella), to act as the earthly vessel for Set, the God of death. He also trades flirtatious quips with historical scholar Jenny Halsey (Annabelle Wallis – 22 years his junior), and has a brief tussle with the evil alter-ego of prestigious professor Dr Henry Jekyll (Russell Crowe, whose CG-enhanced Mr Hyde make-up is laughable).

So, the action scenes are perfunctory, the special effects are lame and the script is pure audience-insulting garbage, offering zero character development and about three decent one-liners. It’s up to one-man charisma factory Cruise to save the day! Which he does, sort of – an extended scene of Tom being beaten bloody in a Crossrail tunnel is by far the most entertaining part of the film (though a brief set-to with some swimming zombies is also memorable). It all ends – inevitably, crushingly – with the promise of further adventures. Who’ll pay to see them is anyone’s guess.