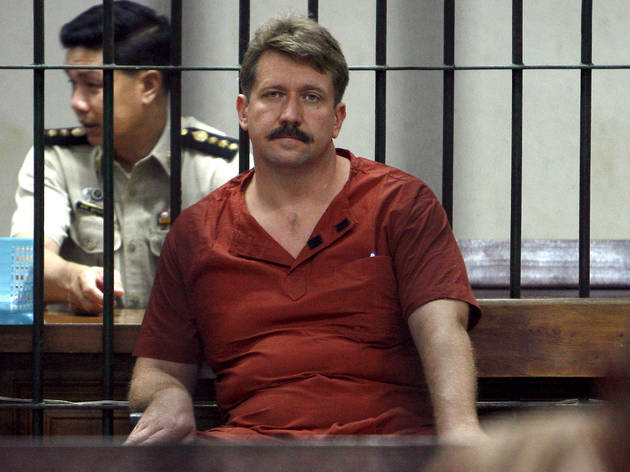 The forgettable 2005 political thriller ‘Lord of War’ saw Nicolas Cage play a rampaging international arms dealer in a story based loosely on the real-life Russian soldier turned smuggler Viktor Bout (pronounced ‘boot’). But on the strength of this documentary, Cage’s casting was way off the mark – Jeremy Clarkson in a dodgy matador moustache would’ve come a lot closer to capturing the so-called Merchant of Death’s real personality.

This is a man who personifies the banality of evil: chubby, avuncular and clad in beige slacks, Bout trafficked arms to some of the world’s most ferocious war zones until he was arrested and sentenced by the US authorities to a minimum of 25 years in jail. All the while – seemingly as a gift to future filmmakers – he documented his life on a cheap handicam. That footage transforms ‘The Notorious Mr Bout’ into a grotesque, gripping hybrid of moral debate and twisted home movie.

We watch Viktor and his creepy, self-justifying wife Alla setting up their first import-export business in a grimy brown office in Amsterdam. And there he is in a Bulgarian weapons factory, testing rocket launchers with an impish grin. And now he’s in a Nigerian village surrounded by child soldiers with machetes and machine guns, as they prepare to go out and massacre their tribal rivals. All in a day’s work.

Framed by insightful interviews with journalists, law enforcement agents and members of Bout’s inner circle, ‘The Notorious Mr Bout’ aims to do for its subject what co-director Maxim Pozdorovkin’s previous film, the remarkable ‘Pussy Riot: A Punk Prayer’, did for its central trio of feminist rebels: to cast him as a symbol of modern Russia’s struggle between the repressive Soviet past and the ‘liberated’ capitalist present. And while this film may not have the headline-grabbing immediacy of its predecessor, in all other aspects it’s just as impressive: a disturbing and darkly funny portrait of a complex, frightening individual.

Director:
Tony Gerber, Maxim Pozdorovkin
You may also like
Popular movies
We know this city. Do you?