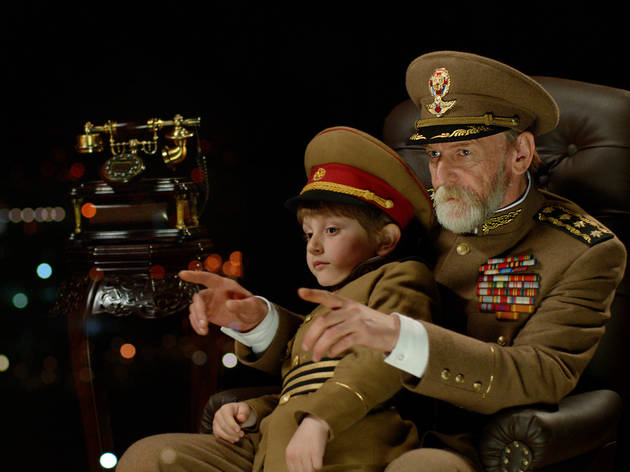 Inspired the Arab Spring and the flight of Colonel Ghaddafi, this is a not-quite-savage-enough satire on power and privilege

While not exactly a Hollywood nailbiter, Iranian filmmaker Mohsen Makhmalbaf has cranked up the voltage from his trademark stately style in this newsworthy drama. The opening credits to ‘The President’ tell us we’re in an ‘unnamed country’, but this could easily be Libya in the months Gaddafi went on the run. It begins with the President (Misha Gomiashvili) in full military regalia, playing with his eight-year-old grandson (Dachi Orvelashvili), who’s dressed like a mini-me dictator in a matching little soldier’s outfit. To show the kid what power, real power, looks like, the President picks up the phone and orders the lights to be turned off in the city. On. Off. On. Off. His Majesty (as everyone calls him) has got the command of a nation at his fingertips. Until he hasn’t.

Makhmalbaf says he was inspired by the Arab Spring, and his film is pitched somewhere between allegory and satire. In a tense scene the presidential limo is marooned in a sea of anti-government protesters. In response to the growing unease on the streets, His Majesty sends Mrs President, her Louboutins and their children out of the country on a private jet to safety. His orphaned grandson wants to stay and is allowed to – you sense the President wants to give the kid a lesson in how to crush a rebellion. But that’s not how it works out. Deposed in a coup d'état, the President and boy go on the run disguised as peasants.

Everywhere the President goes, he meets people who would lynch him in a heartbeat if they discovered his identity – triumphant rebel fighters, men tortured as political prisoners on his orders. His Majesty is an arch-pragmatist and a wily old survivor – pretending to be a priest, a travelling musician, even a political prisoner. Gomiashvili gives a fine, intelligent performance, but there is something missing – a psychopathic flaw that would convince us that this man has killed and crushed his way to power. It doesn’t help that, in disguise, with a scraggly long grey beard and cloak, he looks like Gandalf the Grey.

Still, there are some biting passages here. Twice the President is forced to beg for money, first from a poor barber, then a prostitute he once knew. ‘If I ever return to power, I’ll pay you a thousand-fold,’ he pleads. If he’d left any money for anyone else, who knows, maybe they would’ve coughed up. But the President sucked every last penny out of the country – out of reach in a Swiss bank account. That’s what you call schadenfreude.