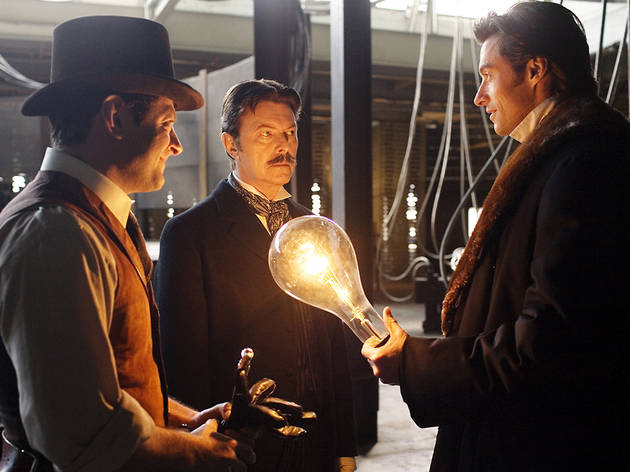 With ‘Following’, ‘Memento’, ‘Insomnia’ and the uncommonly smart blockbuster ‘Batman Begins’, Christopher Nolan has established himself as a filmmaker fascinated by the fluid, tricksy contingencies of memory, identity, narrative and time: the way we depend on the stories we tell ourselves about who we are, and the little slips and dodges, ignorant or willed, that allow us to keep those stories straight – at least for a while. Selfhood emerges from these films as a rickety trick, an illusion dependent on misdirection and oversight. Apt, then, that the director’s latest is a story about magicians.

Nolan’s first period picture, ‘The Prestige’ shares the fractured chronology common to his earlier work. Based in turn-of-the-last-century London, the plot centres on two ambitious young illusionists: flashy, easygoing Robert Angier (Hugh Jackman, abetted, as in ‘Batman Begins’, by Michael Caine) and the more original but less extrovert Alfred Borden (Christian Bale). Fellow apprentices turned bitter rivals after a grisly onstage accident, their escalating feud is a game of cat and mouse played out in a hall of mirrors, set in cramped prison cells and Colorado expanses as well as theatres, as they compete to deliver the most spectacular version of a teleportation trick that calls for something like real magic.

Jackman and Bale make impressive tango partners, neither wholly sympathetic nor villainous, each drawing out the synergy between his character’s personality and his onstage style. It’s a handsome film, too, beautifully photographed by Wally Pfister in a chocolate-and-cinnamon sepia palette flashed with electric blue. But ‘The Prestige’ languishes in a structural Catch-22 of its own making. Explicitly modelled on the pattern of a magic trick, it’s also bound to the rules of the mystery thriller genre; yet the one relies on lingering uncertainty, the other on full disclosure. And in devoting so much room to hollow romantic subplots, the film ends up breaking two of the magician’s cardinal rules: not only does it tell you how it’s all done, it takes so long about it that you’ve got time to look up its sleeves and work it out for yourself.