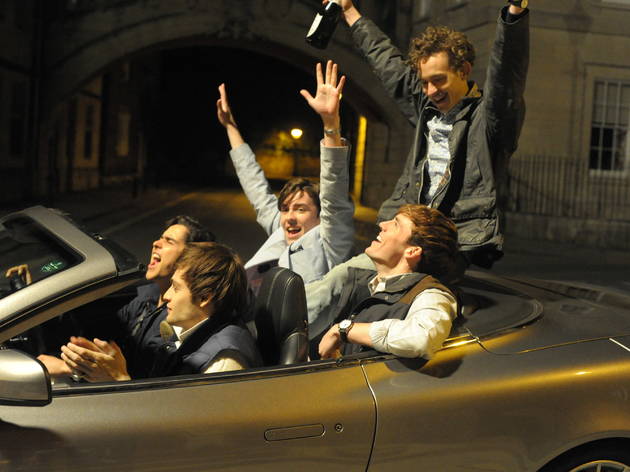 This is one film that Dave and Sam Cam won’t be slipping out of Downing Street to watch on date night. Laura Wade, adapting her own hit play ‘Posh’, has written a darkly funny, colossally unflattering send-up of The Bullingdon Club, the all-male undergraduate dining society the Prime Minister must now wish he’d never joined at Oxford. Thinly disguised as The Riot Club, its members, the sons of aristocracy and the mega-rich, are an arrogant bunch of twits and Hooray Henrys. Here’s one young charmer, outraged that a female working class student has turned down £27,000 (that’s three years worth of tuition fees) to give blow jobs to all ten lads in the club: ‘We’ve got the finest sperm in the country!’ If you met one you’d be reaching for the hand sanitiser.

This is brilliantly acted by a Brit pack of young actors (a couple of them – Freddie Fox and Max Irons – themselves from acting aristocracy). The boys have hired the function room of a country pub to put on a legendary night of debauchery that will go down in club history. In keeping with Riot tradition they plan to get royally drunk – or 'chateau-ed', as they call it – and trash the joint. But nothing is going right: the ten-bird roast is a feathered friend short; a prostitute hired for the night mocks them for being lame boys who couldn’t organise a piss-up in a gastro pub.

Wade’s dialogue is totally convincing, all in-jokes and boarding school banter (‘Girls fornow, girls for later’, is the club’s shorthand for shagging around among the lower classes). The trouble with ‘The Riot Club’ is that dramatically it never quite comes together. The shift into darker territory later, escalating in the early hours into a frenzy of violence, feels inauthentic.

Still, there’s more to ‘The Riot Club’ than mocking vile posh boys – as fun as that is. Wade bookends the film with a middle-aged former Riot boy (Tom Hollander), now working at the heart of government, reminding us that The Riot Club, like Eton, is all part of grooming these boys for power, to take their rightful places as captains of industry and leaders of the country. And still they whinge – as if somehow, in the ‘call me Dave’, we’re-all-in-this-together age of equality, they are a put-upon, marginalised minority. ‘I’m sick to fucking death of poor people,’ rants one drunk Riot member. Well, we're not so fond of you either, toff boy.