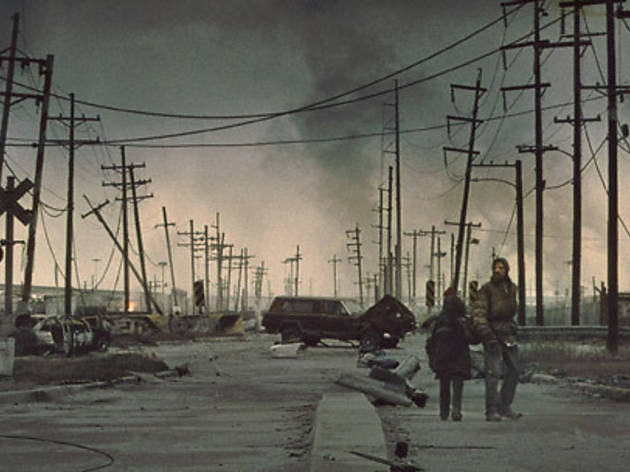 Sap or cynic, you weep at the finish of Cormac McCarthy’s end-of-the-world novel—first published in 2006—not because it concludes with the merest flicker of hope, but because it’s finally fucking over. That’s how bleak the thing is. No father and son were ever meant to wander such a lifeless wasteland, evading cannibals and scrounging for canned peaches. And if you arrived at this chapterless book via its jolly supporter, Oprah Winfrey, or through an admiration of the Coens’ No Country for Old Men (also based on a McCarthy effort), you were in for a sickening surprise.

Does such unflinching fiction make for a decent movie, though? (Forget decent—how about watchable?) The Road, a tremulous heartbreaker onscreen, has successfully made the leap despite an unthinkable amount of fidelity. Shrewdly adapted by British playwright Joe Penhall, the film forges a denatured zone that’s far more literalized than McCarthy’s abstract death place. Ash and smoke swirl in the fetid air. Silence. Roughly ten years have passed since apocalypse struck, and even though we never learn exactly what brought it on, you simply can’t have these ruined cities and jackknifed semis—and a total lack of greenery—without suspecting the button pushers of yore.

It is not morbid to find such sights strangely arresting, since the genre of postapocalyptic movies has long thirsted for visual artists. George Miller, mounting his classic The Road Warrior, clad his villains in regrettable football pads and mohawks; zombiemeister George Romero was literally lost in a supermarket of banality. But The Road’s director, John Hillcoat, maker of the bruised 2005 Western The Proposition, takes burnt grayness to an apogee. (When a sad, red Coke can appears, it’s almost shocking.) The movie is an unshakable mood, and that’s largely due to the grime.

Into this smudgy world come two survivors not given names—a slight pretension, but McCarthy’s own. The man (Mortensen) steers his boy (Smit-McPhee) along the path with unsentimental comments. He teaches him how to cradle their one weapon, a pistol, in his hand; how to place the barrel in his mouth and pull. They encounter weary gangs made up of groggy, unshaven militiamen, in showdowns pitched at a terrible frequency: What will they do to such young flesh? A bitter mother (Theron) lingers in flashback, too depressed for this life, even as her jaw tenses and the supplies run out. At one point, the duo finds itself in a cellar of pleading, captured meat.

Fun, yes? Not for nothing has The Road lingered for more than a year in purgatory, delayed by its makers, who could never find a way to sell it. Still, it must be said—to the movie’s immense credit—that the crux of the novel’s thematic wallop has been brought forward. When civilization ends, only the bond of parenting is there to guide us. Maybe that’s the essence of civilization to begin with. (One starts to see why such a book could be deemed Oprah-friendly.) The boy wonders aloud if they are, indeed, “the good guys,” but such matters rate below protecting their shopping cart.

The actors, all excellent, are slightly undermined by an arpeggiating piano-and-strings score by rocker Nick Cave, who wavers between an appropriate rawness and something too precious. The Wire’s Michael K. Williams makes a brief appearance, mainly as an opportunity for charity. (He’s denied.) Grappling with the man and boy’s southerly quest for warmth, you wonder where such a story could ever lead satisfyingly. These are not the hardy and hopeful notes struck by most sci-fi movies.

And then, Robert Duvall appears—or, should I say, insinuates himself out of the muck. (A critic friend gasped with delayed recognition.) Cagily, his character wends his way into the story, played by the one American actor who might best understand the limits of bluster. “It’s foolish to ask for luxuries in times like these,” he mutters in the Duvall twang, the weather and indignity beaten into him, and The Road suddenly feels major.

The Road is now playing.