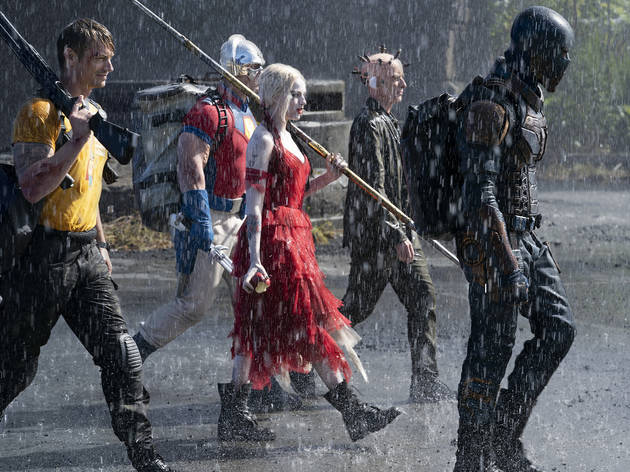 James Gunn holds nothing back in the strangest, bloodiest superhero movie yet

You may be wondering whether this is a remake of, or a sequel to, David Ayer’s 2016 Suicide Squad. After all, it’s the exact same DC-comics-based concept (a bunch of incarcerated supervillains must undertake a highly deadly black-ops mission). It even stars several of the same actors, including Margot Robbie as the sociopathic Harley Quinn, Joel Kinnaman as straitlaced team leader Rick Flag, and Viola Davis as cold-hearted boss Amanda Waller.

It’s a reasonable question. But one which new writer-director James Gunn (Guardians of the Galaxy) answers by effectively saying: ‘Don’t worry about all that. Let’s just have some fun.’

For Gunn, fun constitutes letting rip with some extreme violence that bloodily dispatches many of the movie’s extensive ensemble (the clue is in the title), while keeping the gags coming thick and fast. He positively revels in the inherent silliness of his beloved, dime-store source material.

Cinematically, Gunn draws on all the gritty men-on-a-mission war movies of his childhood (The Dirty Dozen, The Guns of Navarone, Where Eagles Dare). Here the setting is a fictional Latin American island, where our antiheroes must shut down an old Nazi research facility. But into this ammo-and-camo setting he gleefully lobs a talking, walking shark (voiced by Sylvester Stallone), a guy infected by multicoloured, cosmic polka dots (David Dastmalchian), a toilet-seat-helmeted vigilante who claims he’d kill any man, woman or child to protect peace (John Cena) and a giant starfish. Named Starro the Conqueror.

While this sounds like it could be a lurid, teen-boy-fever-dream mess, Gunn gels it together with a wicked sense of humour and an evident affection for his characters who, though not so endearing as his Guardians of the Galaxy, are a hoot to hang around with.

Much like Guardians’ Star-Lord and co, they’re a motley bag of dysfunctional rejects who bicker while they bond. As high-tech mercenary Bloodsport, Idris Elba gives all the manic antics some world-weary grounding, and Stallone’s King Shark is a counter-intuitively lovable, if lethal, lunk. But the show really belongs to Robbie as Harley, on her third outing as the fan-favourite bubblegum psycho. Gunn not only gifts her the best lines, but also the movie’s finest action sequence: a self-contained gun-fu symphony where, in a strikingly lyrical ‘Harley’s mind’s-eye’ touch, brightly petalled flowers tumble where blood should spill.

Along its merry, mutilating way The Suicide Squad has something to say about US foreign policy, military ethics and toxic machismo, though you could be forgiven for missing it amid all the explosions and monstrosities. More than anything, it’s a clarion call for the underdog: the idea that even the naffest or nastiest comic-book villain can have a shot at redemption. Considering Gunn’s recent history – he bagged this gig after Disney briefly fired him from Guardians Vol 3 for a bunch of offensive, decade-old tweets – that makes the movie feel oddly personal.